So you’d love to have your very own state-of-the-art home theater... but you're limited by a small room. Or maybe you're looking for a sleeker projector with more flexibility to suit your home's aesthetic. Whatever the challenge, you can mark that problem solved thanks to Sony's newest miracle, the VPL-VZ1000ES, a 4K short-throw projector that comes loaded with features and possibilities. (“Short-throw” means just that: the projector can be right next to the wall it projects on. Amazing, yes – and spectacularly so with 4K capability.)

Here’s our rundown on the projector, as well as elements to consider as you build the ultimate home theater.

On the outside, the VPL-VZ1000ES looks like something you’d see atop a sideboard – and more resembles an attractive box meant to hold fine silver. Except this box tosses up full 4K images up to 120 inches across – as in TEN FEET WIDE – turning your little 12x14 back bedroom into a cinematic thrill ride with the touch of a button. The ultra-short throw projector is very easy to set up and get running, and when it’s off – there’s no hint that your little abode also doubles as a cinema.

Click here to view all of the Sony Ultra-Short Projector specs.

Turn Any Room into a Home Theater

The projector stands well on its own, but if you’re interested in making this the focal point of a greater home theater, here are a few things to keep in mind.

If you’re doing it right, you’re also going to want a way to darken your room for rainy day matinees – and Lutron’s Sivoia QS gets it done nicely. Battery operated (no wires / no need to call an electrician), and virtually invisible when rolled up via remote control, the Sivoia comes in 1500 fabrics and colors, but you’ll want an opaque fabric to black out the outside world.

From there, and to get the most of every pixel (and there are 8.8 million of them), we recommend hanging Elite’s Aeon CLR edge-free, ultra short-throw screen right above and behind the projector. The screen alone increases your contrast levels 100 fold compared to projecting on a standard matte white wall or projection screen.

House your new short throw projector in a beautiful, custom-made credenza from Salamander, which was designed specifically for Sony's ultra-short throw projector. (Comes in a variety of finishes, optional accessories and customizable interiors. Inside, there’s room to hide speakers, amps and everything audio.)

All done, and voilà, you’re there: a stunning, technically brilliant, mostly out-of-sight home theater – no matter how small your room is. A way to watch Game of Thrones or The Game of the Week like a fancy pants Hollywood director. Life is good.

Featured Products in this Project: 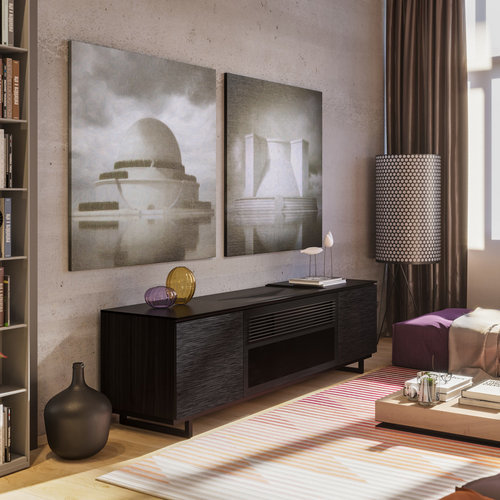 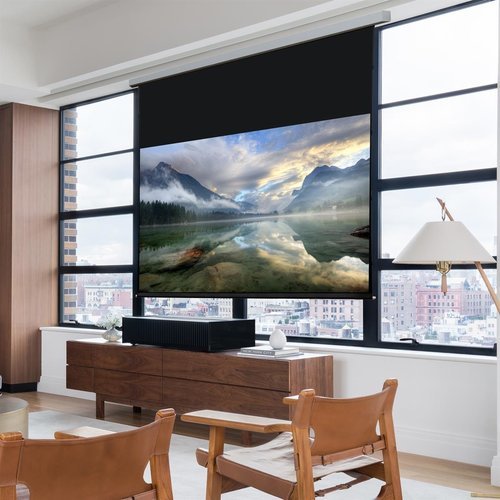