Our client's home theater dreams were bigger than their unfinished basement space. They knew they wanted three rows of seating, a 193-inch screen, and the best audio performance possible, but limited ceiling space was one of many foundational roadblocks. Alongside a team of amazing structural and acoustical engineers, our own system designers, programmers, and installation crew, and the most creative and thoughtful clients we could ask for, the impossible became possible. The result is a jaw-dropping, earth-shaking home theater, with 16 subwoofers and a full wall of McIntosh gear. Read about the full system installed and check out photos of the process and final project in the galleries below. 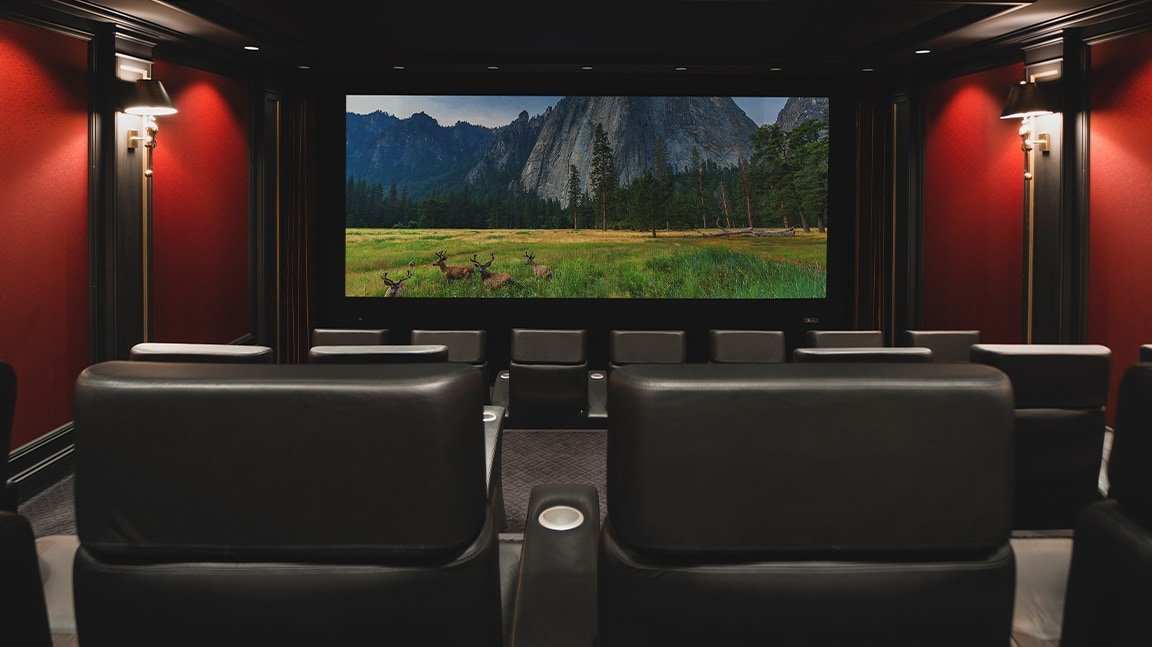 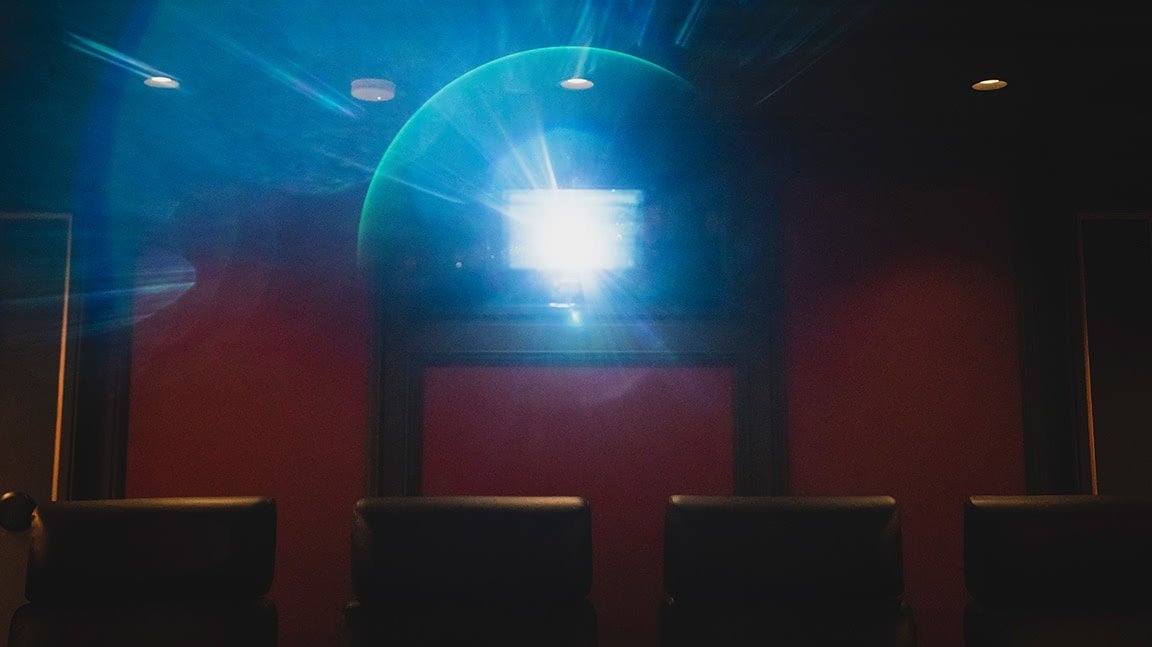 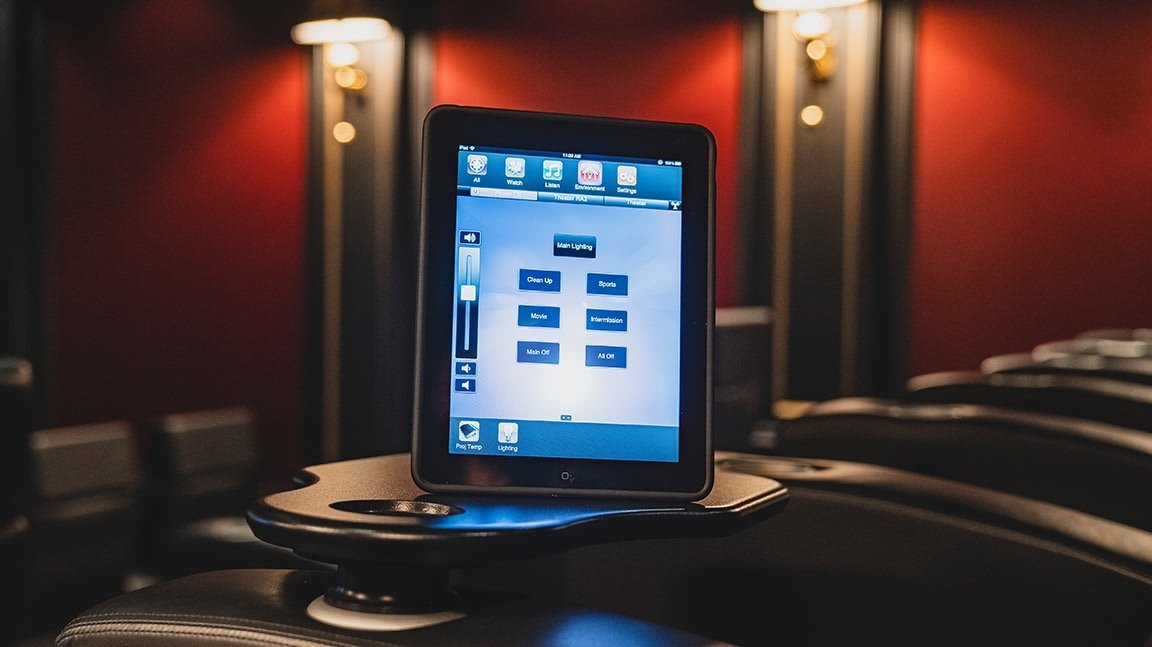 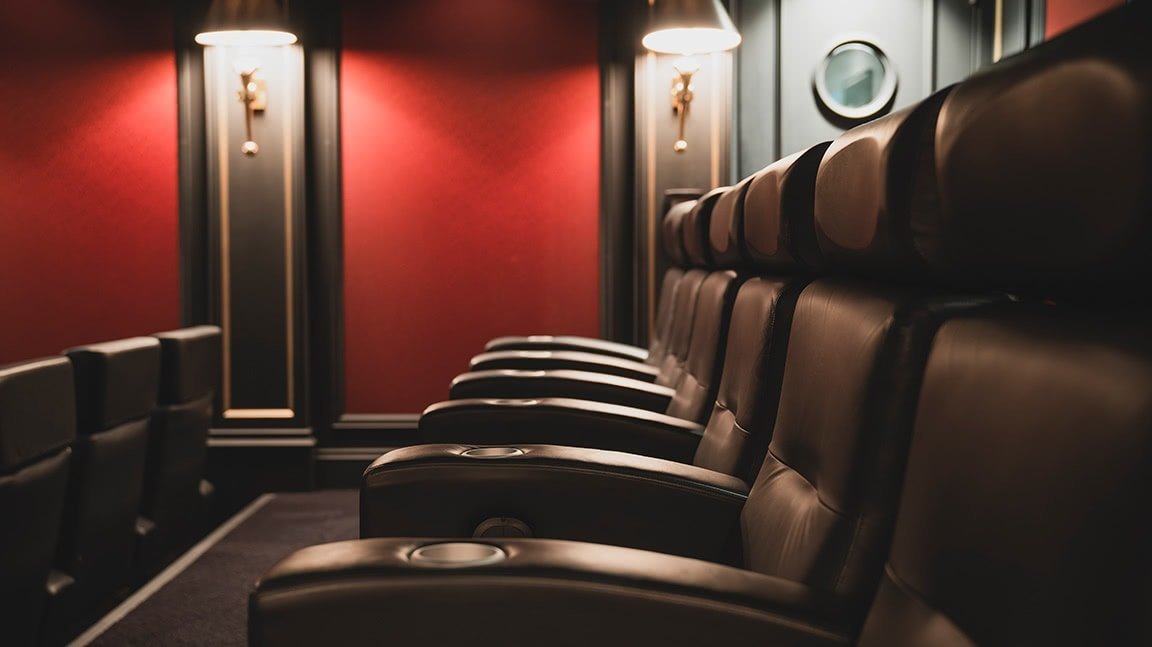 Where It All Began

A little over 10 years ago, we enhanced (and simplified) our client's movie-watching experience by loading his entire movie collection (over 4,500 films and counting) onto Kaleidescape media servers and unifying the control of a brand new Klipsch and Integra surround sound system with a URC remote control. An above average system and a significant upgrade from what they had, but the upgrade process left our clients with an itch that needed scratching. After experiencing the dedicated home theater in our Montgomeryville showroom, it became a question of not “if or when” but simply how good of a home cinema experience we could create for them in their home. The only challenge? They wanted an experience that was bigger than their existing unfinished basement space.

You Want Us To Do What?!

Most of the dedicated theaters we design in client's homes have two rows of seats. The homeowner wanted three. This affects the site lines from projector to screen so ceiling height is critical. We couldn't raise the ceiling into the first floor of the finished house, so we expanded downwards by excavating 3-feet beneath the existing foundation to get the height we needed.

Next up: the desired screen size - a 193-inch Stewart GrayHawk with full four-way masking - required more throw distance for the Runco projector than was available in the unfinished basement space. Thinking quite literally "outside the box", Plan A was to build an additional projector booth outside the house in a concrete bunker, which would have meant excavating into the front yard. All parties decided that might be going a bit too far, so we engineered a smaller projector booth and mounted the Runco SC60 (a 3-chip DLP projector with two lamps) on the theater room floor, pointed the lens toward the ceiling and bounced the light beam off an angled mirror that then shoots the image though a projector booth window and across the room at the screen.

At 80 pounds, the projector required its own HVAC system. Its booth includes an industrial grade cooling system, which not only keeps his projector running perfectly but is also set up to send the homeowner an alert if the temperature in the booth falls outside parameters. Traditional ductwork would be too noisy so we routed the feeds through the concrete in the floor of the theater for dead silence. The feeds were also extra-large so the air could move at a low velocity and avoid the annoyance of having a breeze run past you while you're trying to escape into a movie.

Additional precision planning was dedicated to planning the space to be wheelchair accessible for the homeowner. And we weren't allowing any compromises on this one. This required some extra enhancements such as a gap in the primary viewing location in the 19-seat theater for the homeowner's wheelchair. He was going to have the best seat in the house, we made sure of it. The aisles and corners needed to be wide enough to allow easy maneuvering into position in order to fully enjoy the true cinematic experience. Easy operation was also crucial. The homeowner is restricted to a powered wheelchair and needs to be able to control everything with one hand. The Savant system allows him tremendous independence, giving him command over his movie and music collection as well as the home’s lighting and temperature/HVAC systems. 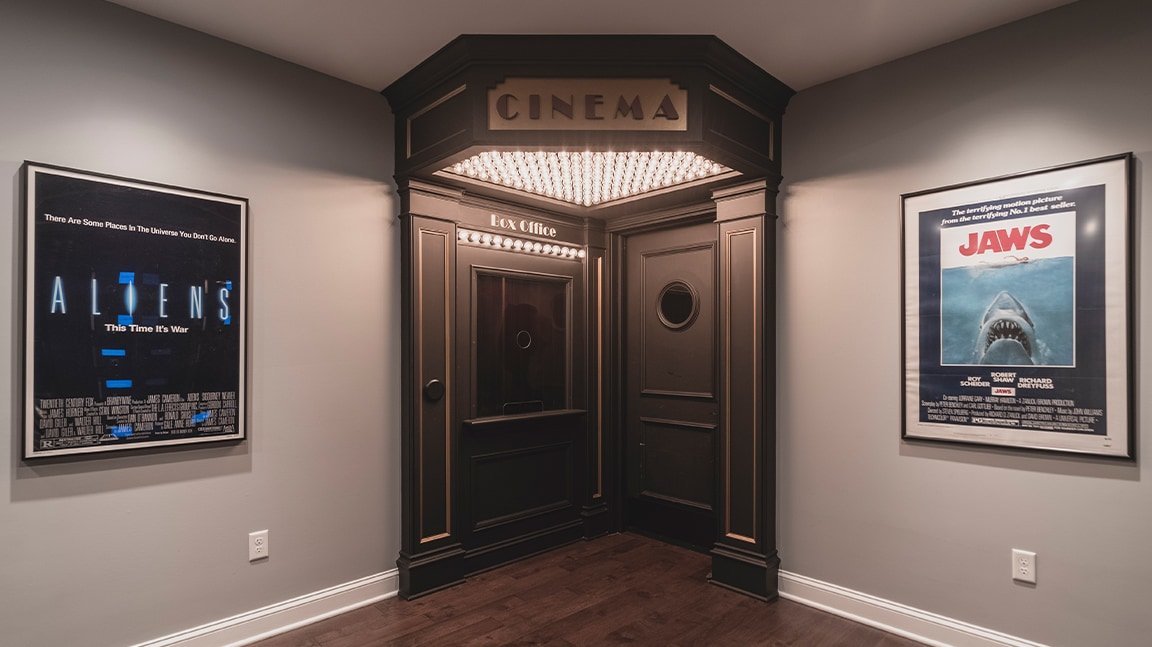 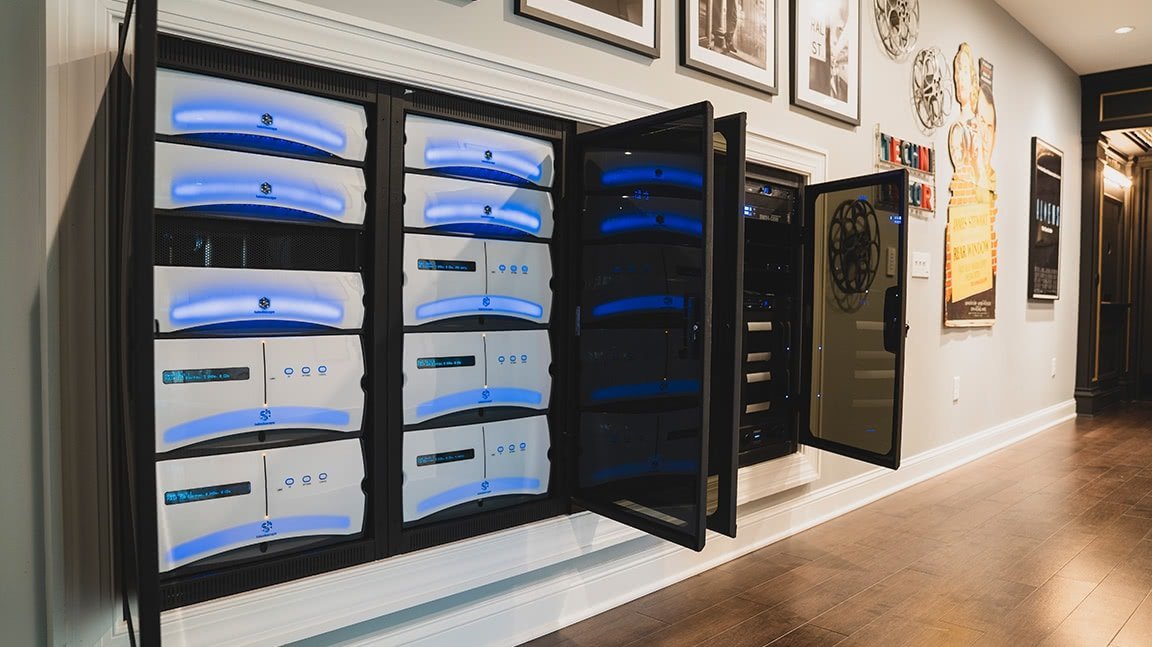 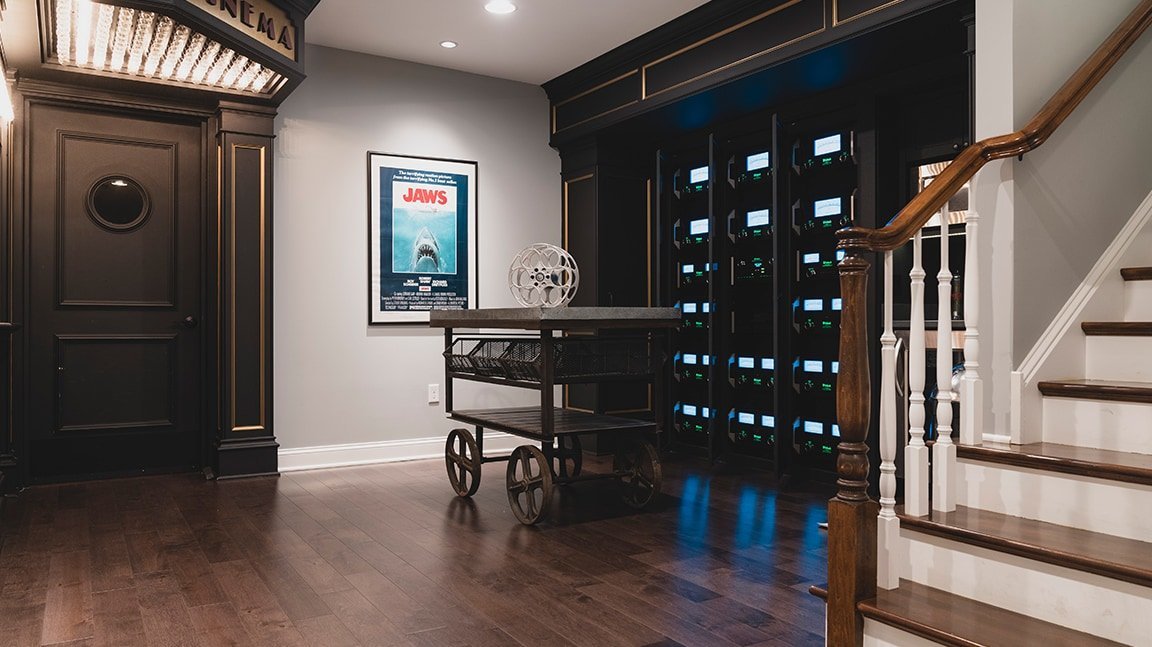 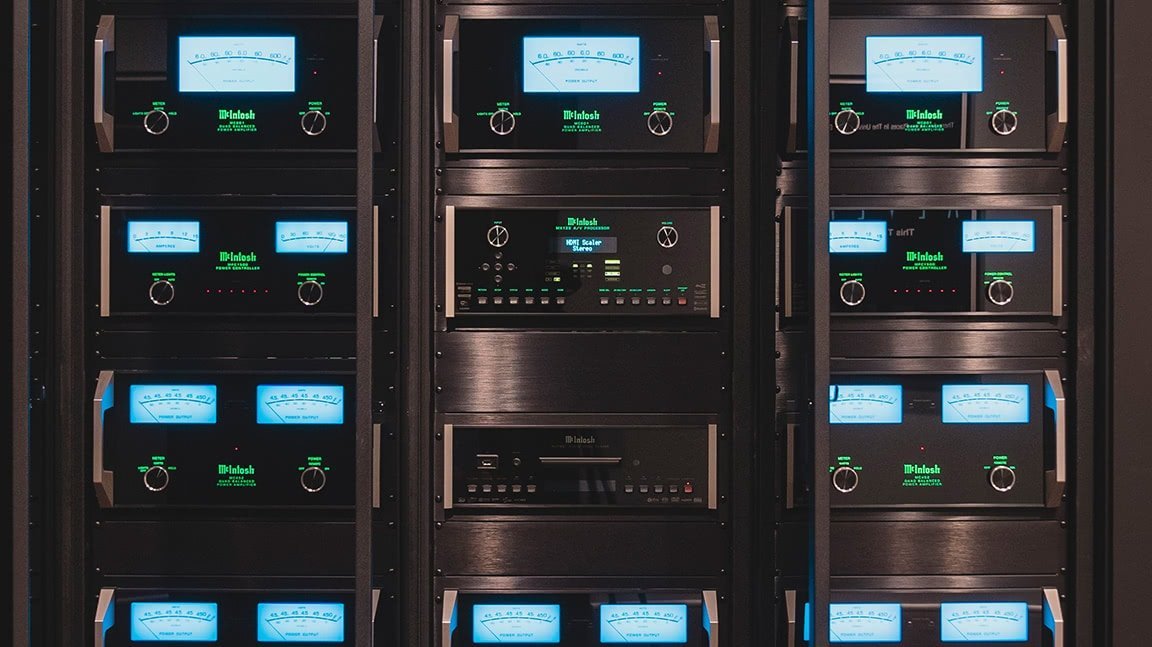 A big picture was important, but this client knows his audio and wanted to push that experience as far as it could go. We engaged engineer and acoustics expert, Keith Yates Design Group out of Auburn, California, whose primary customer base includes Hollywood’s finest. One of the advantages of World Wide Stereo’s extraordinary reputation is that we have access to virtually unlimited resources and partners consisting of technical engineers and craftsman, architects, designers... and just really cool people in "the movie biz".

Putting our best foot forward, we installed a full suite of Bowers and Wilkins speakers and 16 (yes, 16!) JL Audio subwoofers. The JL subs are complemented by a custom-built “Uber Sub” made up of four 15-inch and four 14-inch drivers and 10,000 watts of power to deliver frequencies down to 9Hz for that earthshaking “being there” feeling when things get exciting.

The speakers and subs are all surrounded with 2 feet of acoustic material, perhaps the most crucial part of a theater, and the walls of the theater were lined with acoustically-transparent fabric that hides the speakers installed behind them but doesn't impact the audio coming through. This allows the speakers to remain out of sight, but a "reveal" setting on the homeowner's iPad engages an array of strategically placed LED lighting that illuminates the speakers with an otherworldly glow. In normal mode, no one can tell that the walls are artificial or that speakers are concealed behind them.  This trick never fails to bring out the oohs and aahs from friends and family visiting for movie night.

The ceiling was lined with speakers readied for future Dolby Atmos. Note that though this system was installed prior to Dolby Atmos processing, it was tuned by an engineer from Dolby Labs who was actually working on the coding for Atmos at the time.

There are a total of 29 speakers:

Amplification was also a no-compromise decision with each speaker getting it’s own McIntosh amplifier so not a single power supply was being shared amongst two amps. The McIntosh system is displayed in a temperature-controlled showcase in the theater’s snack lobby. Nearby is another rack of glowing blue components made of Kaleidescape servers and Blu-ray carousels (again, the client has about 4,500 movies in his collection) and the Savant processor that allows the homeowner to easily operate the complex system.

Our thanks go out to Electronic House Magazine for their profile on this project.