LG's Signature Wallpaper TV - Everything You Need to Know

Why do they call it "wallpaper"?

LG’s new flagship OLED TV (the W7) was dubbed “wallpaper” because it’s so insanely thin and light. This "Best of CES" award-winning product attaches directly to the wall with special magnets that pull the screen flush – leaving no gap – just like wallpaper.  And exactly how thin is insanely thin, you ask? NBC claims “thin as a sticker” at less than 1mm, while The Verge calls it credit card thin. The DailyMail ups that to 4 credit cards thin, and upon further reading (down the rabbit hole I went) I saw 5mm, 2.57mm, 2.85mm and 0.97mm. Oddly, LG’s own website avoids any mention of exact specs, instead of calling it “virtually flat.” Suffice it to say, when you can quite literally peel a 77” TV off the wall with one hand – we’re talking really really really thin. (There’s a 65” version, too.) 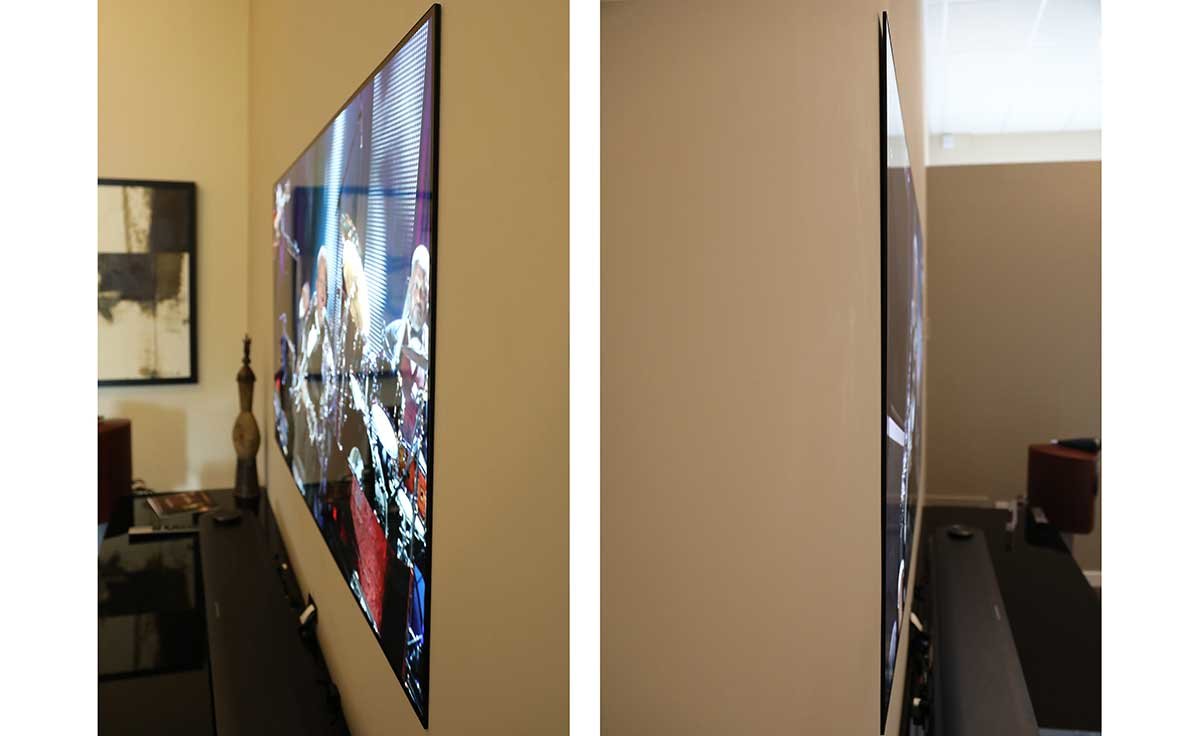 Thinness aside, how does it compare to other OLEDs?

Every TV in LG's OLED product line shares many of the same features, and like LG’s B7, C7, E7 and G7, the new W7 supports High Dynamic Range including HDR10, Dolby Vision, Hybrid Log-Gamma* (HLG) and Technicolor. (The BBC called HLG "the future of high dynamic range 4K broadcasting.” So for now – the W-7 is as future-proofed as possible). What’s more, LG tweaked OLED performance across the board for 2017, and results include better brightness, precision detail just above black and more complete image accuracy from both SDR and HDR content.  Every 2017 OLED TV also comes with the latest version of webOS and Dolby Atmos support through psychoacoustic processing from just two speakers – although there are six in the W7’s All-in-One box.  If you're thinking "bigger", we can also show you a number of ways to upgrade audio beyond LG’s stock sound. 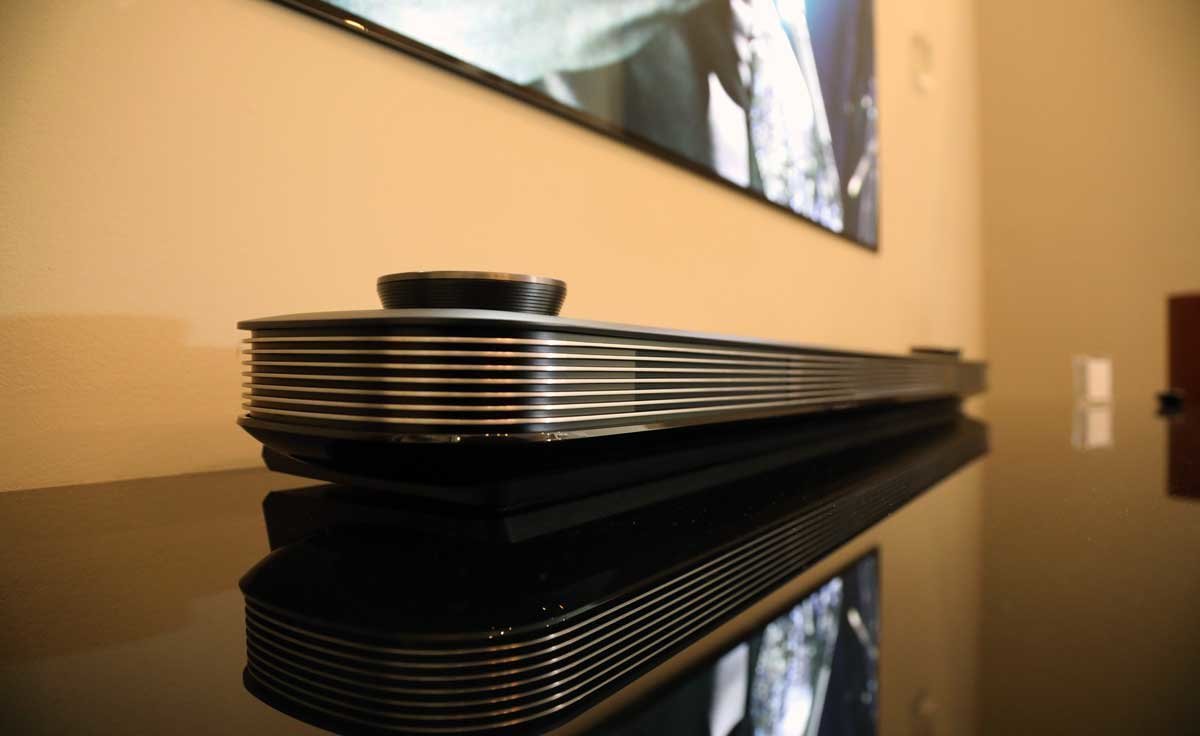 There are practical realities to a 2.7MM screen, like “where do all the electronics, connections, amps and speakers go,” and LG's answer is the AIO (All-In-One) Box. The box itself isn’t bad looking, but it does steal some thunder from the W7’s minimalistic screen. The AIO box attaches to the screen via an in-wall 47cm flat cable system. (If you want to move the box further away, a 160cm cable is available.) The AIO Box houses two forward speakers, two upward speakers and two subwoofers. Everything is hard-wired at the rear end and includes all connections – aside from the main cable that attaches to the panel. (The AIO Box also comes with tons of inputs in the back including 4 HDMI 2.0b ports.) All in all, the AIO Box is a fairly elegant solution, and like Dorothy’s Wizard behind the curtain, it’s the only way to make a record-album thin (that one’s mine) flush-to-the-wall OLED panel.

The LG W7 is a high-end television deserving of a meticulous install – and LG gives you everything you need to do it yourself, including a better-than-most unboxing and installation YouTube video.  (Note: according to LG, the flat strip cable that connects the panel to the AIO BOX can be painted to disappear into the wall.) But if you do want some assistant, let us know. Our experts installed a 77" LG W7 Wallpaper TV for a client, and it looked fabulous in their home. Check it out here!

Turn it on, and the end-effect is, at first, hard-to-believe… like the TV is actually part of the wall, or was drawn on the wall.  I’ve also seen a few high-end gallery and museum installs, where the TV is mounted to a piece of clear, free-standing plexiglass and appears to levitate in mid-air. (Check out the photos of the CES presentation here). Think Minority Report, but with far better resolution and way deeper/richer color. Turn it off, and it’s a piece of art – pure black, perfectly formed, and infinitely cool. The AIO box aside, viewers would need some sort of bionic vision improvement surgery to see how TV gets much better moving forward. The picture is gorgeous no matter the source or content and watching something as immersive as the BBC’s new Planet Earth series was, in our opinion, pretty amazing. Let us know if you agree! Come in and see the amazingly thin LG Wallpaper W8P OLED 4K HDR Smart TV, now proudly hanging in our Montgomeryville showroom. 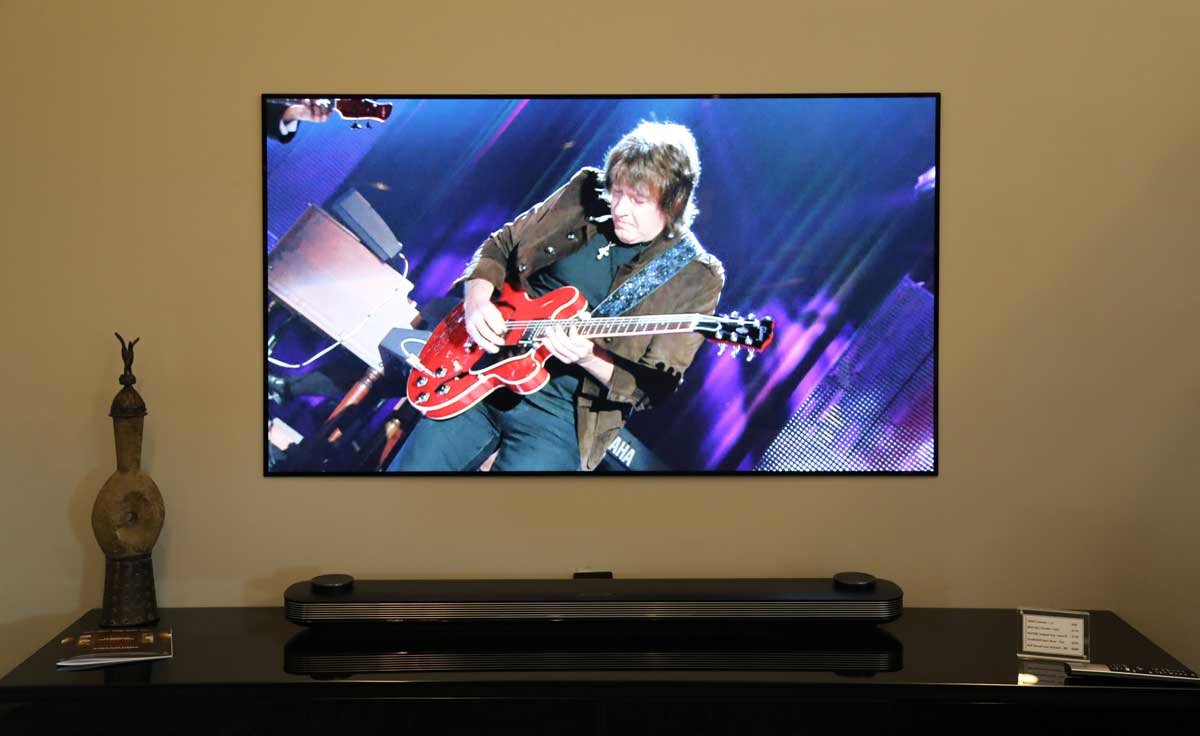