I was recently out in Dallas, for CEDIA, and I was at a dinner with Focal. World Wide Stereo has a great relationship with them; our sales staff has even visited their facilities in France and got to experience the construction of their world-class speakers and headphones first-hand.

We were chatting about how much I loved the new Utopias after my last video review. They asked if I had heard the Bathys yet (which I hadn't at the time). And they told me that I needed to get my hands on them. They were very proud to talk about everything that went into creating them and even shared some good nuggets of information that they gave me the "okay" to talk about.

The Bathys isn’t Focal's first foray into Bluetooth headphones. I’ve owned their first pair of wireless headphones, Listen Wireless, since they came out in 2018. I used them as my traveling headphones for many years before I got a pair of noise-canceling ones. I was curious to see what kinds of improvements they’ve made after such a long period of time (especially in technology years).

You may be wondering, how the heck do I pronounce Bathys? And why did Focal name them that? Bathys is pronounced BAH-TEES and is short for Bathyscaphe. The Bathyscaphe is a vessel that was designed to go deeper than submarines. It's made to reach the deepest depths of the ocean, where it is calm and absolutely silent.

Compared to my Listens, the Bathys are a BIG step ahead in all the categories that are important to me: comfort, clarity, quiet, and style. They traded in the folding design for a lay flat design, and the plastic construction for a mixed metal assembly, which we’ll get into a little later. 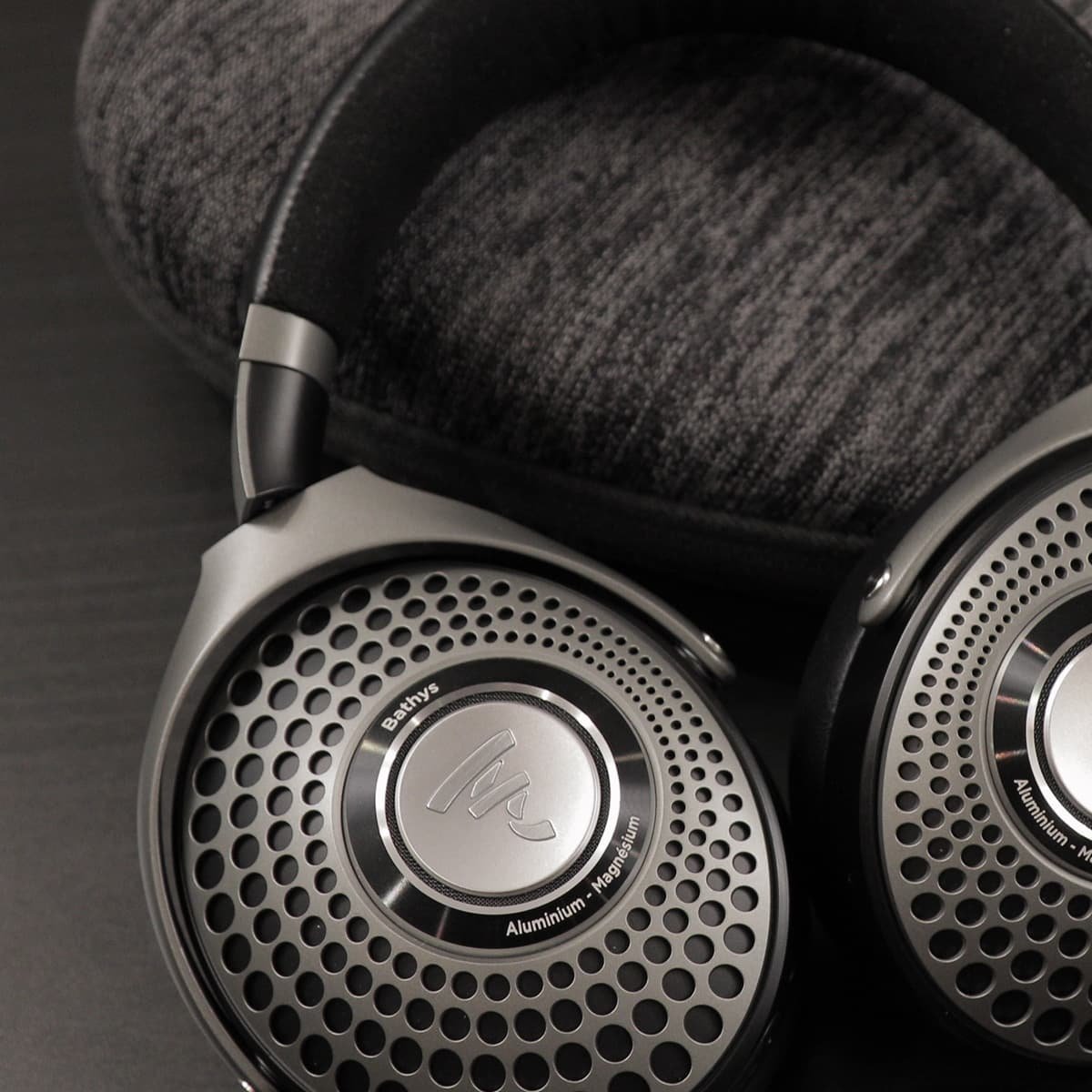 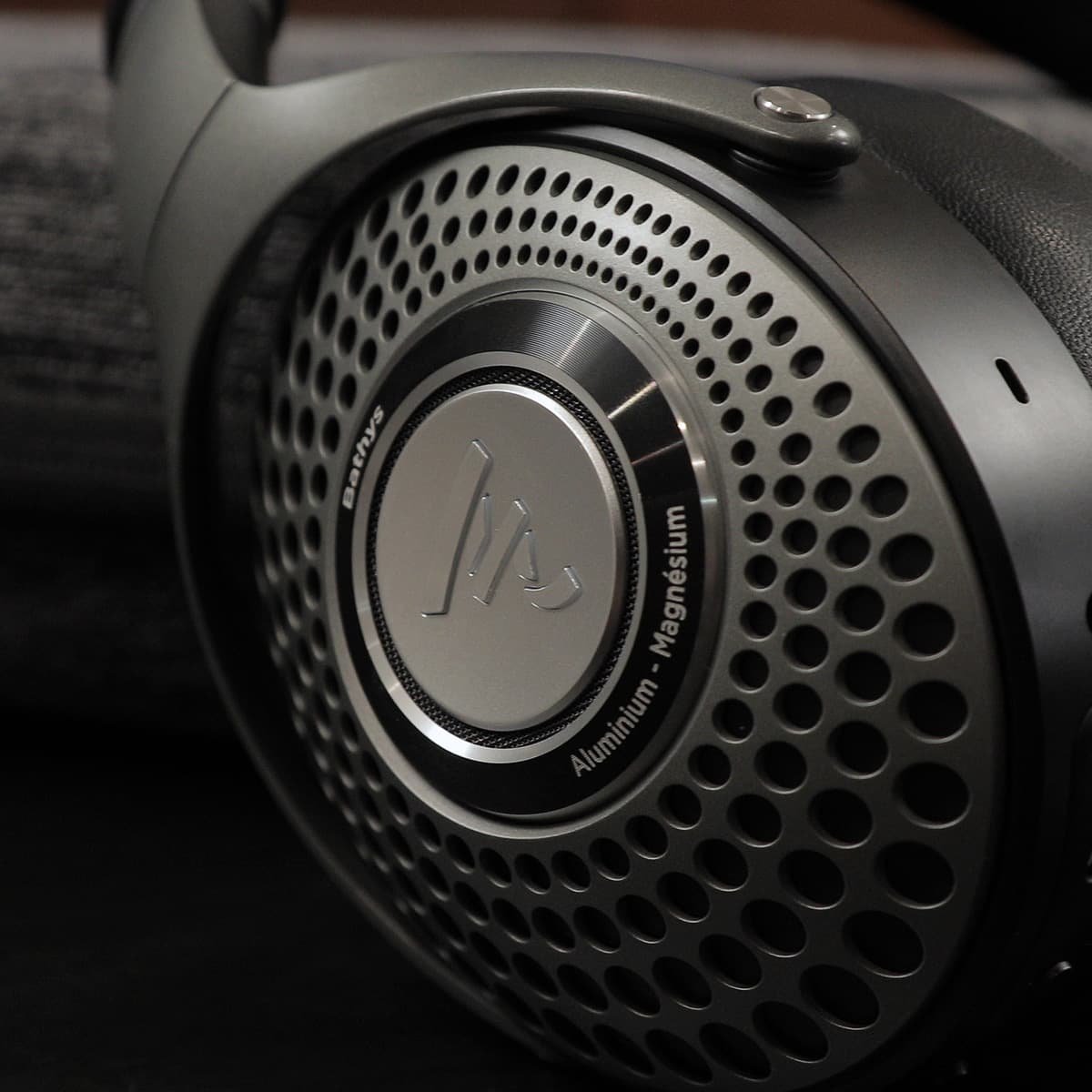 Focal headphones are a statement piece; they stand out visually just as much as they do audibly. And the Bathys are no exception. They are both fashionable and functional.

Making the Bathys travel-friendly was a primary concern for Focal. They had a target weight of 350g, so components were designed and decided on specifically for that point.

The Bathys are made with a Black/Silver aluminum and magnesium construction and have been designed to share the same aesthetics as their fellow Focal closed-ear headphones, like the Celestee or Stellia.

A design detail that I love is on the ear cup, where you'll find the Focal flame logo in the center. When the Bathys are powered on, LED drivers will illuminate the logo. A solid light means you’re connected and ready to go. If it’s blinking, it is in pairing mode. Another detail about the earcups is that they are replaceable. They snap right off and can be renewed if they lose their luster.

If the light is too much or you’re on a late-night flight and you don’t want to be a beacon in your seat, you can dim it or turn it off in the Focal & Naim app.

Good sound isn’t always #1 when people are choosing headphones. Comfort is a large part of the decision.

The Bathys sit very comfortably on your head. The headband is a mix of leather on the top and microfiber on the part that will sit on your head. The leather ear cups are deep and are like little pillows on your ears. The adjustable yoke makes it so they’ll fit your head.

For the sound, they chose to invest in magnesium for the driver and then use aluminum mechanical construction. The Bathys are tuned to the Focal sound so the naturally are dynamic. They reproduce a nice full sound and when the bass hits it’s present but not too boomy. You can listen to them for hours at end without feeling ear fatigue. However, you don’t have to listen to them loud to enjoy them. 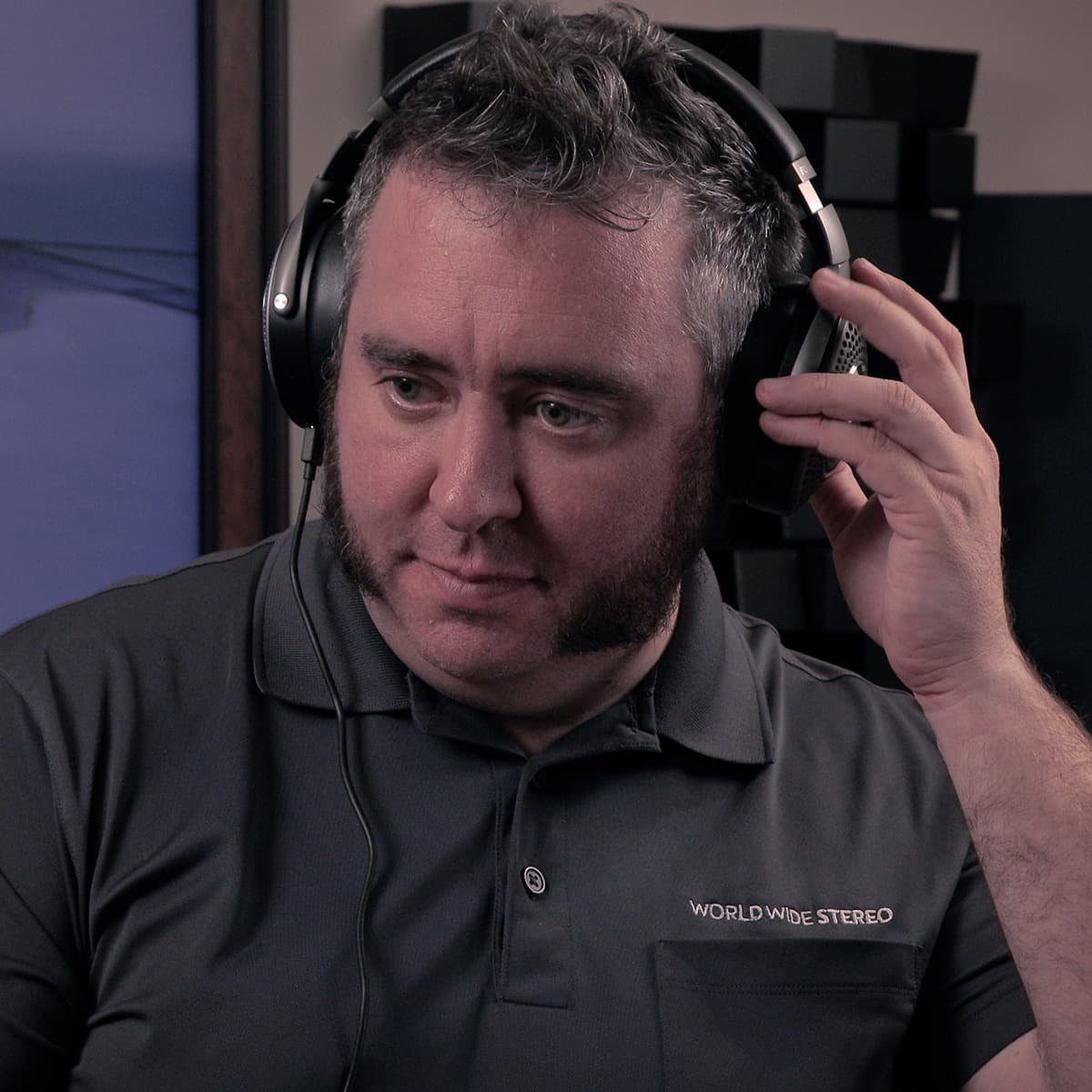 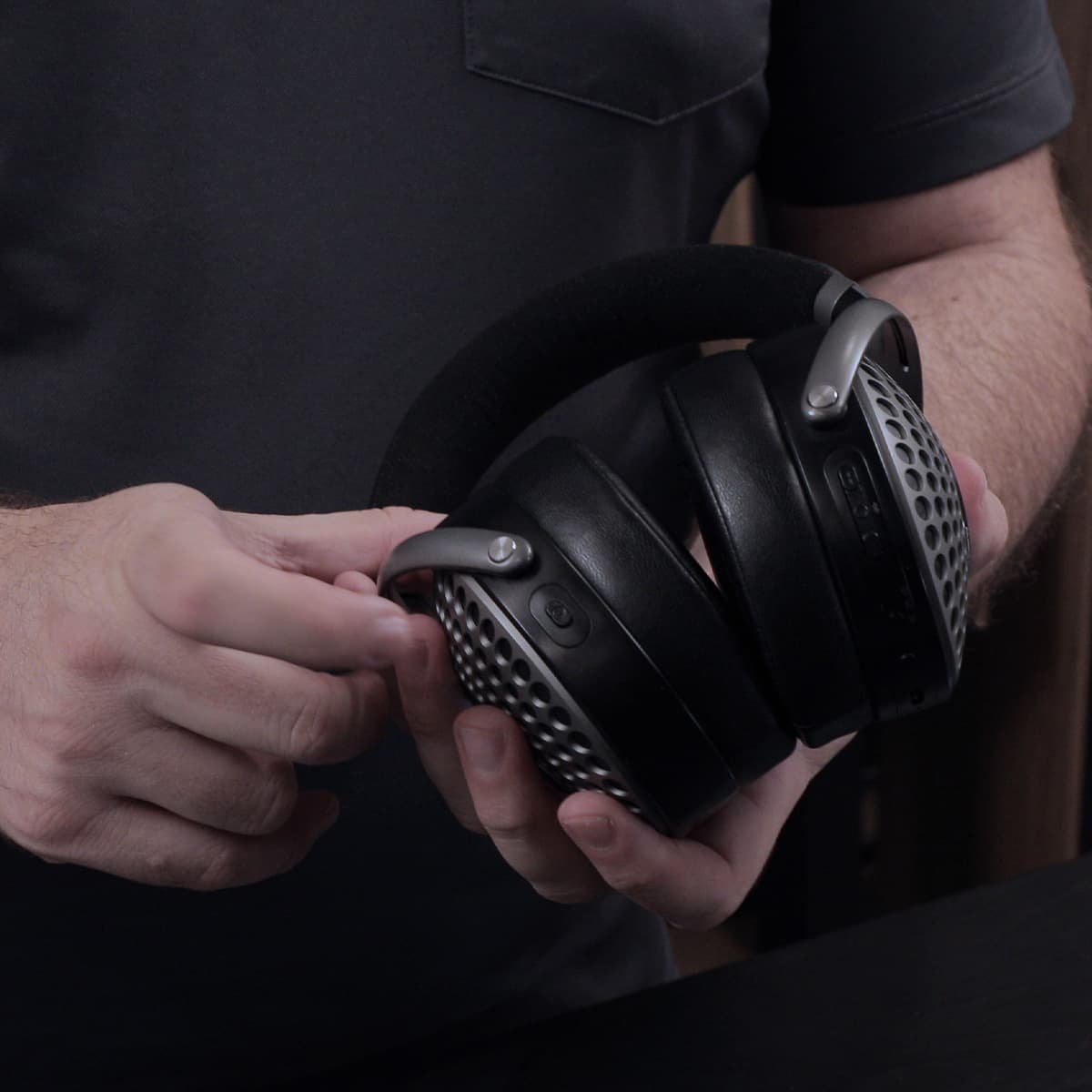 Let's jump in that Bathyscape and do a real deep dive into the development and technology behind the Bathys. (See what I did there?)

As with their other best of class headphones, the drivers are designed and engineered in Saint-etienne, France which is southwest of Lyon.

The Bathys use a 40mm aluminum and magnesium driver and has a frequency range of 15Hz to 22kHz. You’ll notice that all of Focal’s headphone drivers are 40mm. They just use a different mix of metals and a different motor structure based on the performance level of the headphones. The reason behind this comes from their years of manufacturing car audio tweeters of the same size and utilizing the same equipment.

A very interesting thing the Bathys are doing (which I didn’t hear talked about in ANY of the videos that have come out so far), is something I find fascinating, while other audio purists might feel is sacrilege.

The Bathys cross-feed a little of the right audio into the left ear and vice versa. If you perform for an audio analysis, you would see a dip at about 900Hz during their playback. IF you didn’t know that this was a feature, you’d say it’s a problem if you look at a graph.

This cross-feed allows the headphones to feel more natural because when we listen to speakers, we will naturally hear the left speaker in our right ear, not just your left.

Like I said, I think it’s fascinating, and I don’t know why more people aren’t talking about it. 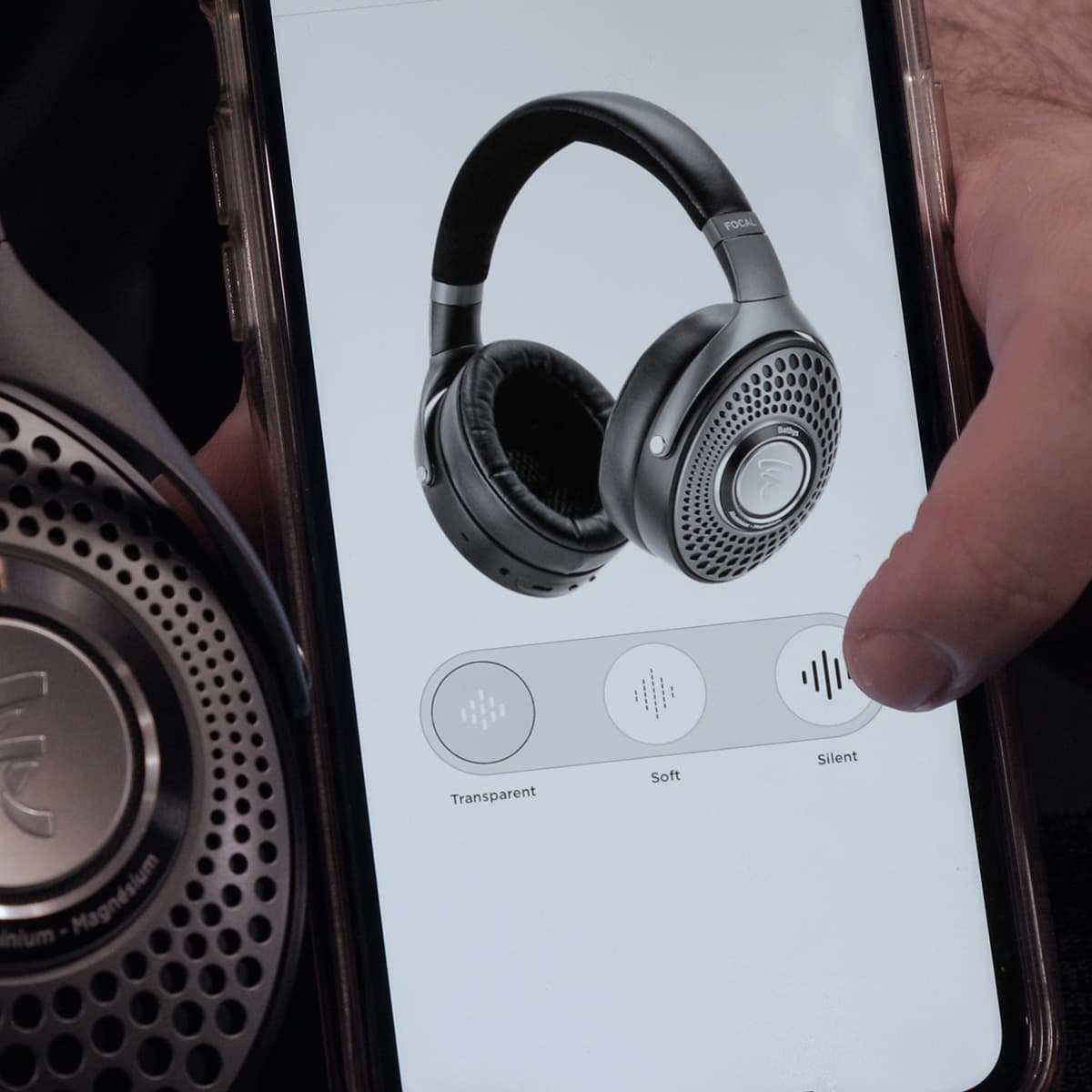 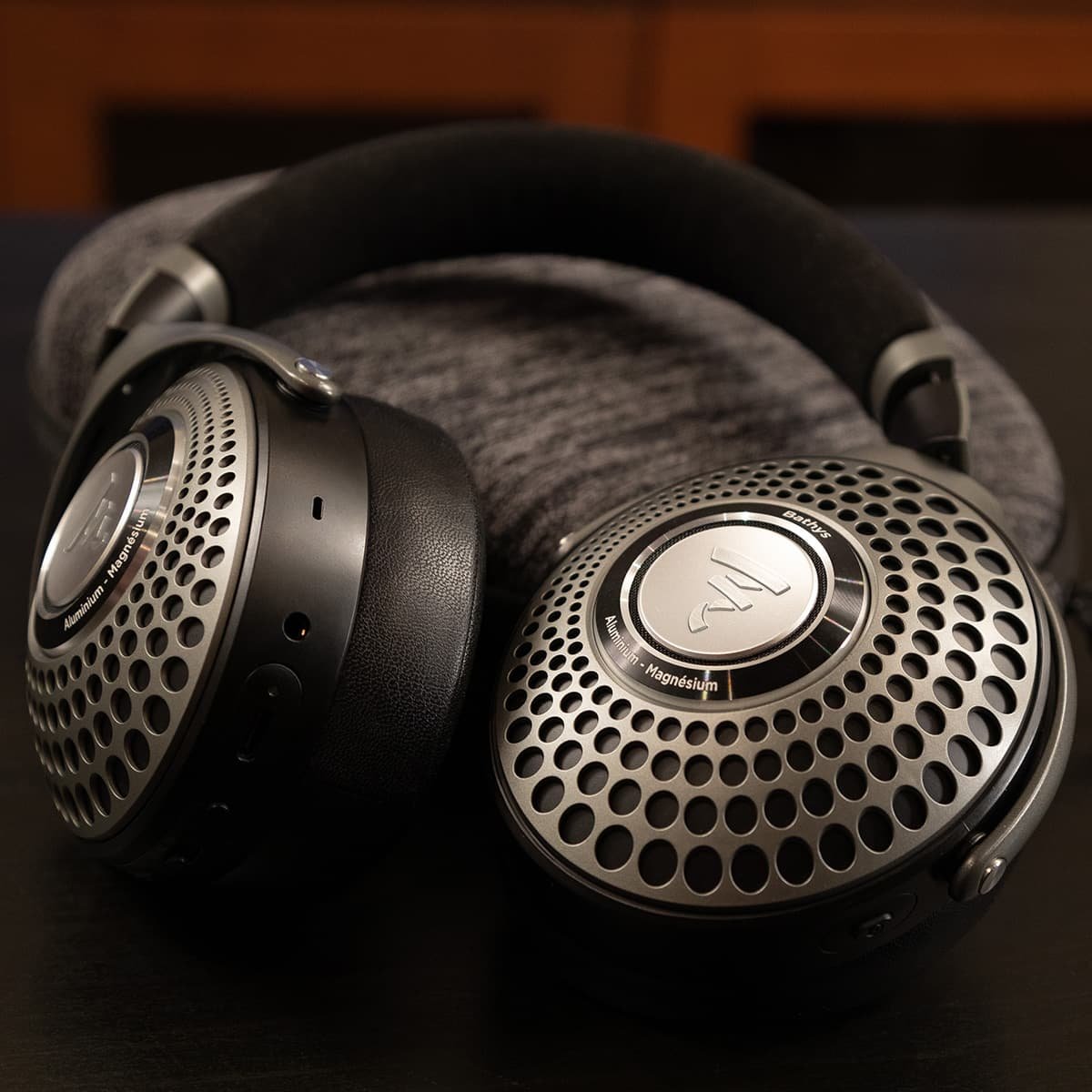 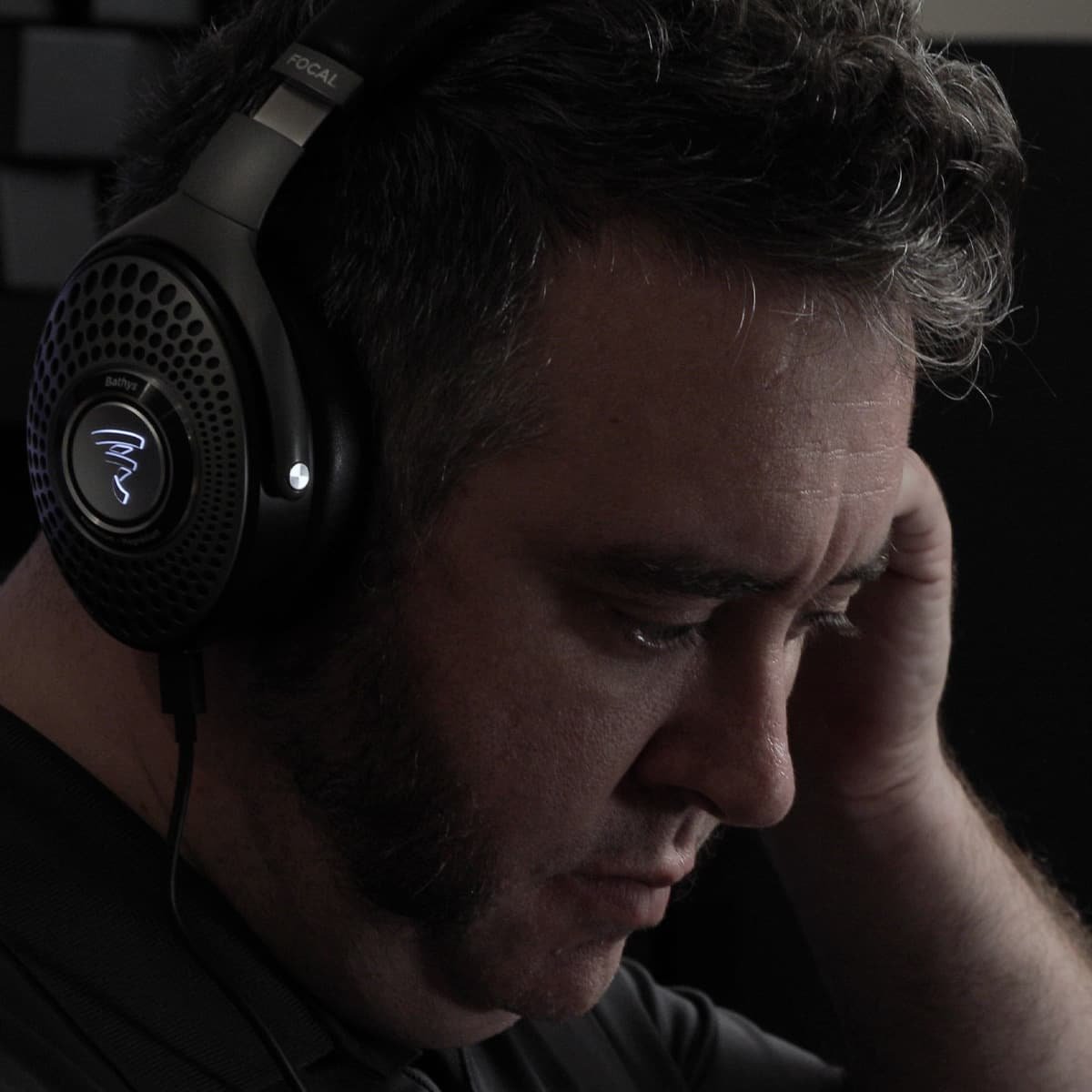 Technologically, the Bathys are Bluetooth 5.1 with multipoint (meaning it can connect to multiple devices so you can pick up a call from your phone and listen to music from your computer) and they’ve moved to some of the latest Bluetooth Codecs.

The Bathys have the standard SBC connection (which is universal among Bluetooth headphones), AAC for iPhone connectivity, and AptX as well as AptX Adaptive for Android devices (with AptX Adaptive being capable of up to 24bit/96kHz sources). If you were hoping that this would also have LDAC capability, I’m sorry to say it’s not available.

The Bathys have 8 microphones for their Active Noise Canceling and they can be used for phone calls or virtual meetings. There (4) mics per ear cup. (1) for Bluetooth. (1) for ANC and (2) set inside to monitor the output of headphones to reduce total harmonic distortion per ear cup. It seems like they’re using the ear-cup microphones to actively adjust themselves. Rad, right?

Focal went one step further by creating a DAC mode for the Bathys. The DAC mode will let you directly connect the Bathys to your phone or computer via a USB-C cable to listen to music up to 24bit/192kHz. The DAC mode really brings the WOW factor. It’s impressive how much more you can get out of the BATHYS.

If you want to go even deeper, the Bathys also have a jack mode. They’re a triple threat. Focal included a 1/8” stereo connection to allow you to connect them to a standalone headphone amplifier.  This lets you attach them to devices that may do high quality DSD files or maybe your esoteric tube headphone amplifier. 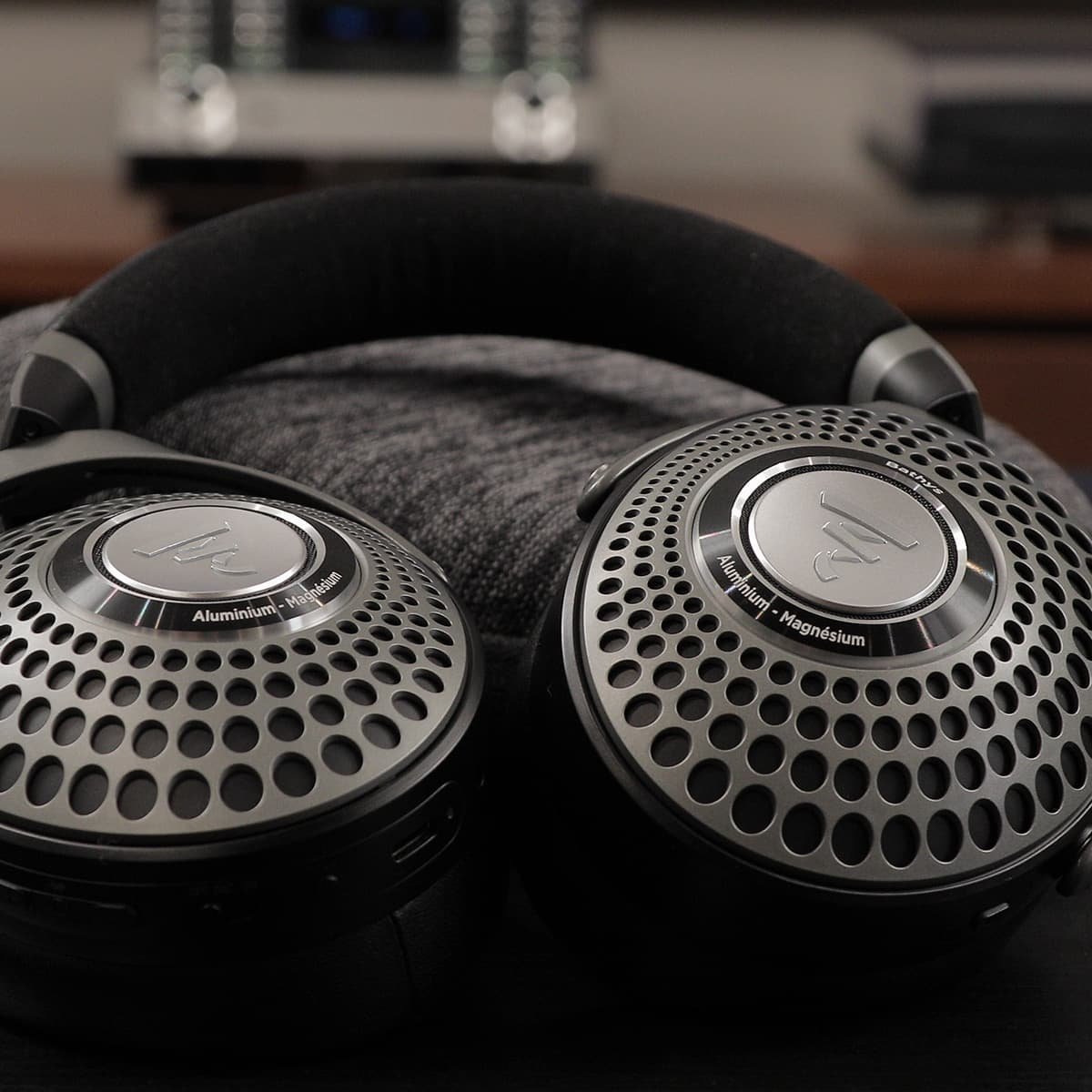 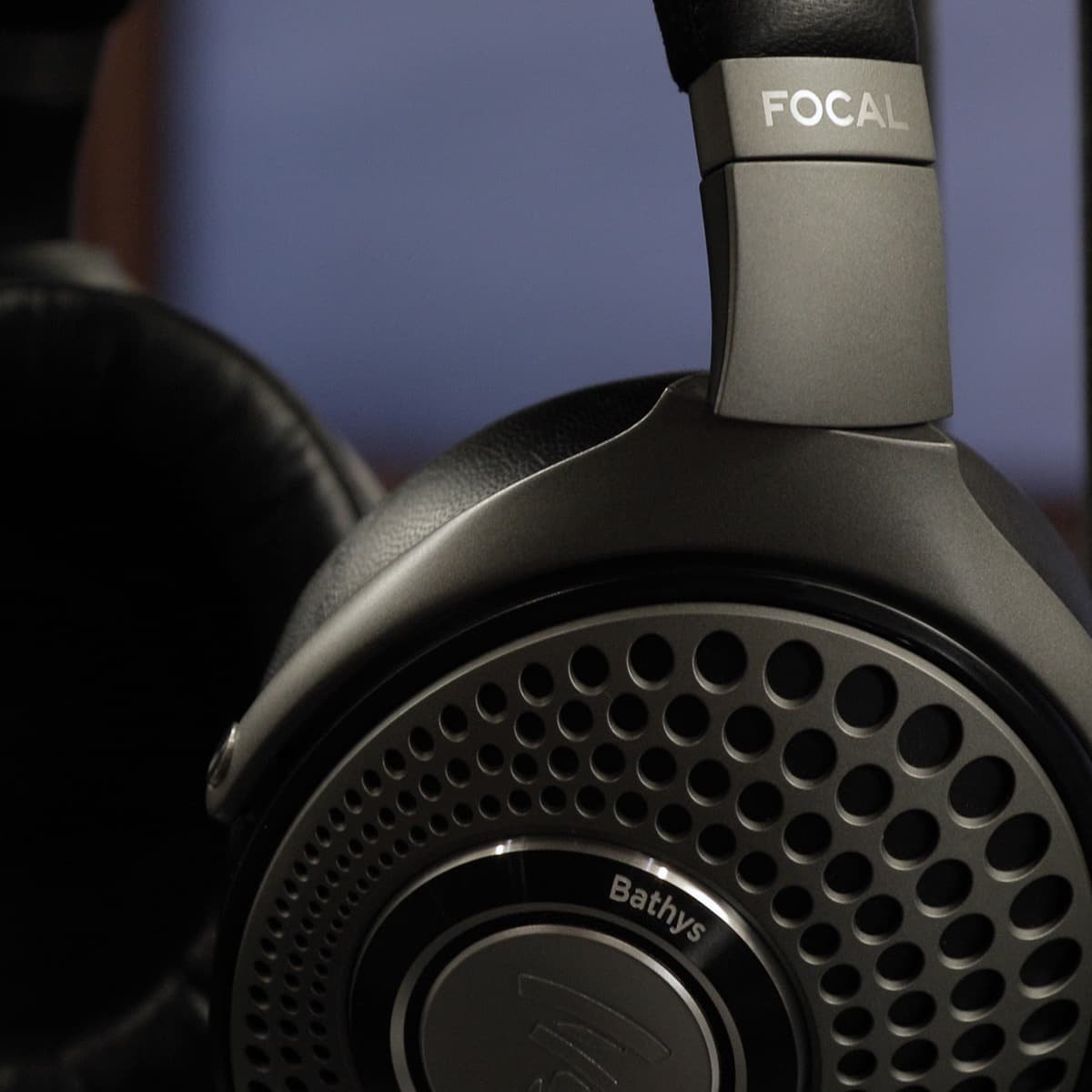 Let’s talk about setting the Bathys up for success.

Burn in is a thing. The Bathys' motor structure is different so they’re only rated between 50 and 100 hours to get warmed up.

You could run tracks designed to be dynamic and go from 20 Hz to 20 kHz,(I included one in my latest Qobuz playlist that I used for my testing), but honestly, just wear’em.  And listen to them! Nothing sucks out of the box, and they’ll only sound better the more you use them.

I’ve been experimenting with a lot of Focal headphones recently. My Listen Wireless are now connected to my loft TV for late night viewing, my Celestee are paired with my PeachTree Decco for music at my desk, and I just did a video with the brand-new Utopias where I tested them out with my 2-channel setup (unfortunately, Focal didn’t let me keep them).

For testing out the Bathys, I mostly had them connected via Bluetooth and in DAC mode for music and movies.

While testing, I used the new Roon ARC app to stream my Qobuz playlist as well as access some of my locally stored high resolution files. I wanted to take the Bathys out into the world since they’re built to travel, and the Roon ARC app is designed to roam with access to all my music. At the same time, I am able double check the technical output to make sure I’m getting high resolution audio streams while I’m out and about.

I did reuse the playlist I had created for the Utopias, but I did add a track that I like to listen to when evaluating headphones. It is from The Gaslight Anthem’s debut record “Sink or Swim”. In the song, “ I Coul'da Been A Contender” at 1-minute and 47 seconds, Brian Fallon softly sings, “I sang them blues to you” which gets lost if you’re not paying attention or underwhelming with just “ok” headphones. The Bathys let that line shine with crisp detail, where otherwise it would have been hidden.

I also liked listening to Seu Jorge’s rendition of "Life on Mars?" from the Life Aquatic soundtrack. I felt it was a little apropos.

It’s a very raw recording and doesn’t have any polish. There are “better” recordings of this but this version feels like it’s recorded with a single microphone trying to capture a moment. The detail you can hear as his fingers strum the guitar and slide across the strings as he changes notes feel like you’re with him playing and not a sterile studio environment.

The Bathys  reproduced the song so well, when I was listening to it again to prepare for this video I stopped trying to write about it and I just sat and listened. And this was in Bluetooth mode! It’s amazing how much clarity still comes through when I wasn’t even using them to their highest capacity.

Now, let's move from music to movies. I connected the Bathys to my iPad to test how they would perform while watching videos, which is what I tend to do traveling.

They sound good, but the Bathys are quieter when watching movies compared to listening to music. It must be the use of the SBC codec that reduces the output. I found it was the same when using them with a Bluetooth connection, in DAC mode and in Jack mode with my iFi GO blu.

I tried this out watching the Wembley stadium scene from Bohemian Rhapsody. It feels like it it is two clicks too low and just doesn’t have the impact needed. I compared it to the soundtrack which has the same tracks available and there was a drastic difference in volume. Not a fatal flaw, but I think it’s important to point out.

However, the Bathys had no issues with lip sync when connected digitally and watching a video. Other headphones in the market are known for struggling with lip sync in this scenario.

Usually when I connect an external DAC, or even DACs built into headphones, they’re not set to work with video. The Bathys took that problem out of the equation.

And speaking of the DAC, it was nice to reduce my connections by jumping directly digitally. I still experience some noise from my phone with an external DAC and reducing links in the chain was a benefit for my connections and an enhancement to my experience. It works with audio, too.

The Bathys are an exceptional set of Bluetooth headphones and sound great wirelessly. But if you want to be extra, you have the option.