With a proprietary Beryllium driver that goes from 5Hz to 50,000Hz, the all-new Focal Utopia headphones will rock your socks and steal your audio loving heart. They are open-back headphones, meaning your music isn't enclosed into a small space. The benefit of an open-back design is that it allows for the drivers to have full decompression and they don’t have to compensate for the resonance of an enclosed space. The headphones will also breathe better which will make music feel more open and airy.

The Utopias Are A Real Head Turner

Focal Audio did not pull any punches with the design aesthetic or the materials used. They feature a genuine leather headband, forged recycled carbon yokes (the piece that slides into the headband), perforated lambskin memory foam (which is soooo comfortable), and a honeycomb grille to ensure openness for the drivers. The center of the earcup has hints of a rich, dark red color surrounded by black chrome rings and matte blacks, highlighting the care put into the Utopia's gorgeous design.

The Utopias are full-range headphones that go from 5Hz to 50,000Hz. They’re like wearing a pair of tower speakers on your head. Remember, the audible range that humans can detect sound is 20Hz to 20,000Hz. But that doesn’t mean you won’t respond to the sensation of the pressure of your eardrums with infrasonic frequencies. There are tracks that you can stream that just play these infrasonic frequency bass notes. The track I used was “The Lost Frequencies” from Qobuz. I’m glad to say I can still hear 10Hz, but 5Hz is below my range. The Utopias didn’t wobble but played strongly at 10Hz straight. And yes, I sat for a minute just listening to a 10Hz frequency. It’s a really weird sensation. Try it out.

Let’s talk about the proprietary 40mm pure Beryllium ‘M’-shaped dome. It’s the first near field open-back full-range driver that’s been put into headphones. While chatting with Focal, they told me it’s capable of a 5mm excursion, which is why it’s capable of hitting those low notes so well. The grilles also follow the same contour so there is equal distribution and distance. As with a lot of high-end speakers, Focal told me that, “Yes, you should break them in”. At around 70 hours, you’ll see them properly warmed up and performing at their peak.

Since I listened to them straight out of the box and then many hours of break in later, I can tell you there is a performance difference. The Utopias get better with age, much like me. Once you have them in that sweet spot, you’ll want to take them everywhere.

The Utopia's impedance is 80 Ohms, meaning they’re on the higher-end and will need more power to pump up the volume. You don’t fill a Bugatti with 87 unleaded, so don’t sell yourself short by using just your phone to power these headphones. They’re going to be hungry for power to perform.

The Utopia's sensitivity isn’t terribly high at 104dB. The higher the sensitivity, the higher your chance of picking up noise from a lesser quality amplifier is. If you’re hearing distortion, that is most likely from your gear rather than the track you’re listening to.

The Utopias will truly sing with a dedicated headphone amplifier. You'll want something that can push them to their limits and perform to the high benchmark they’ve set. Pieces I think will match the quality and performance of the Utopias would be the Naim Uniti Atom Headphone Edition (which has a Headphone output dedicated to the 4 pin XLR connector), the McIntosh MHA150 (which has a dedicated impedance range to match the Utopia's 80ohm impedance), or if you’re on the go, the iFi Audio IDSD Diablo to get the most out of your phone.

Underpowering the Utopias will give you an underwhelming experience. Like I mentioned, don’t sell yourself short. 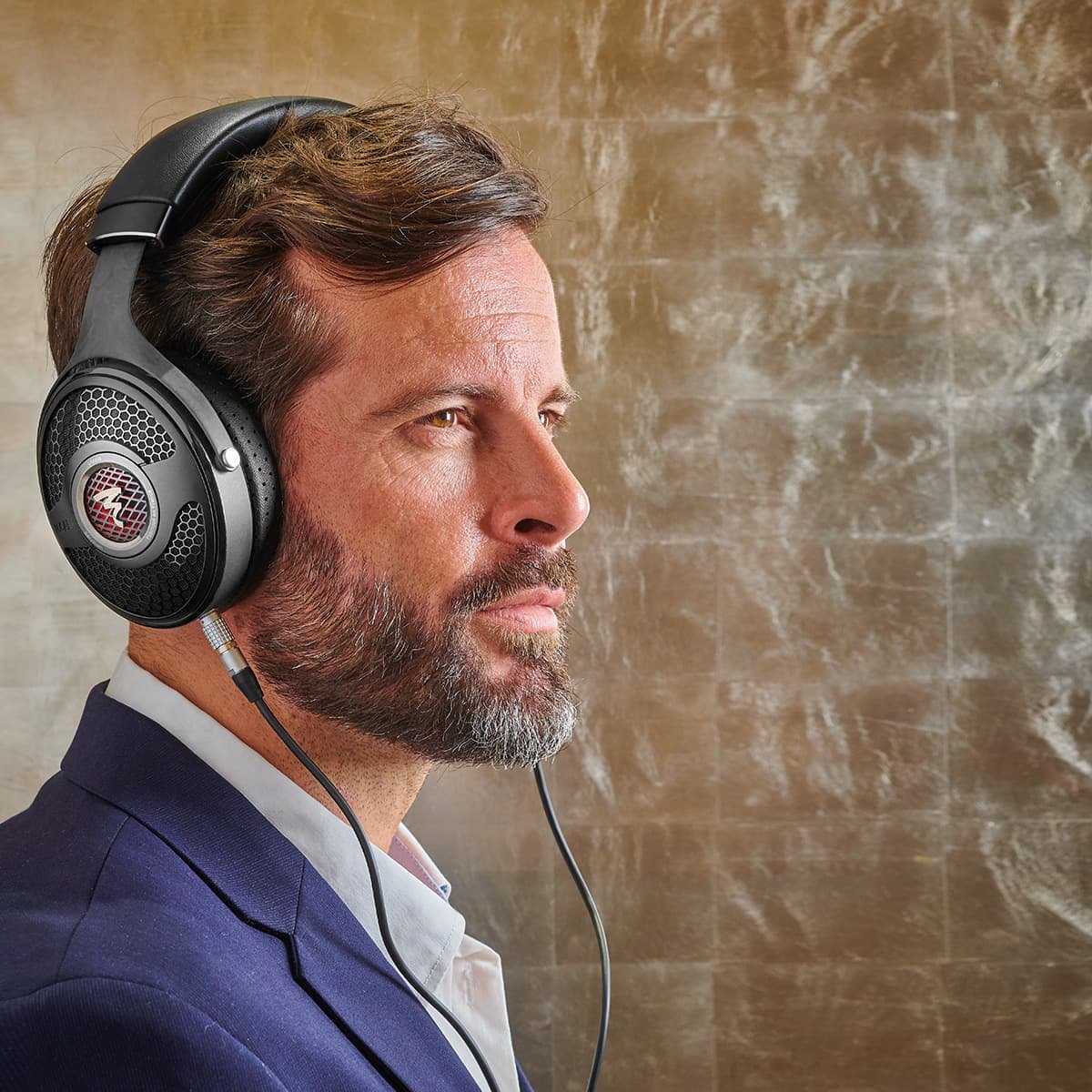 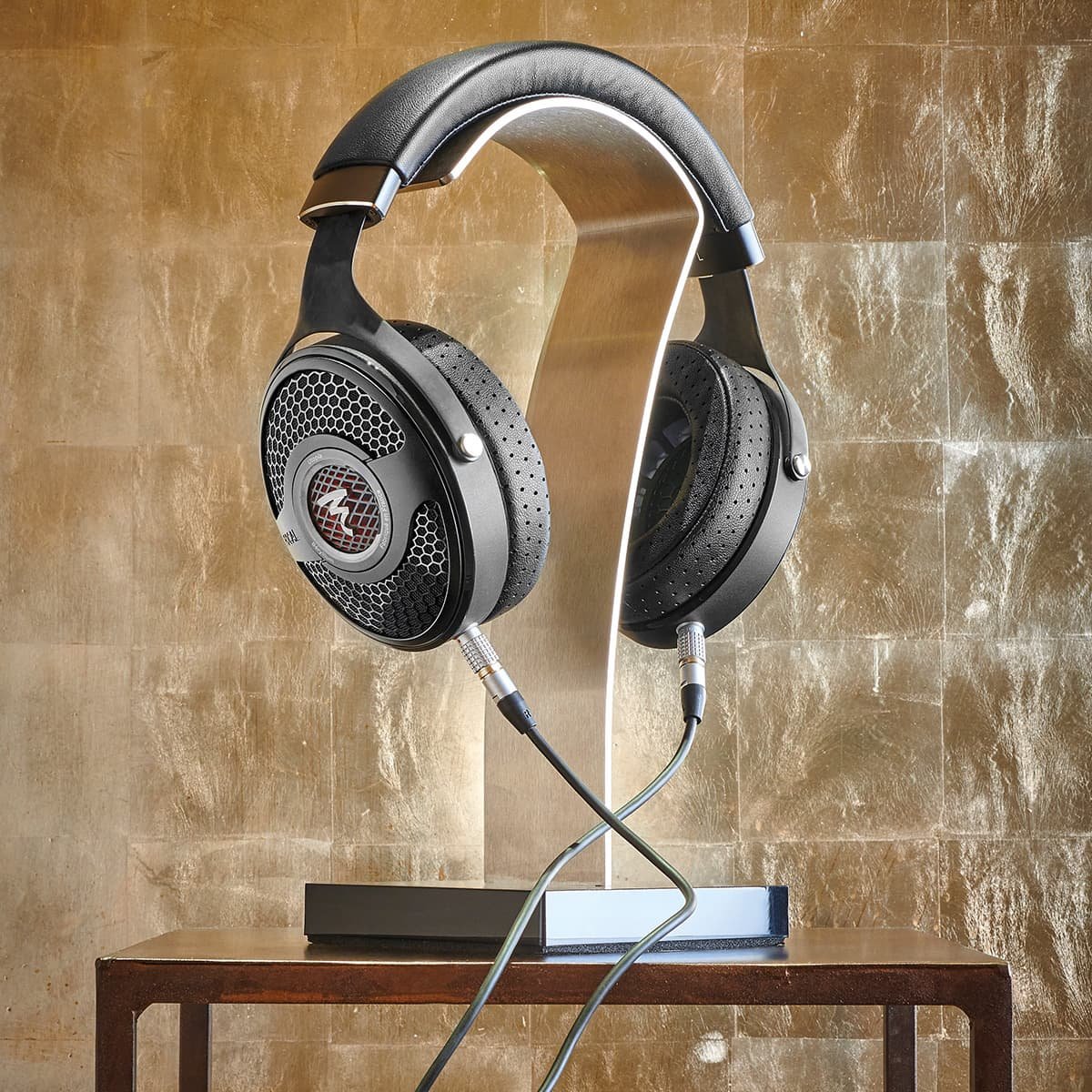 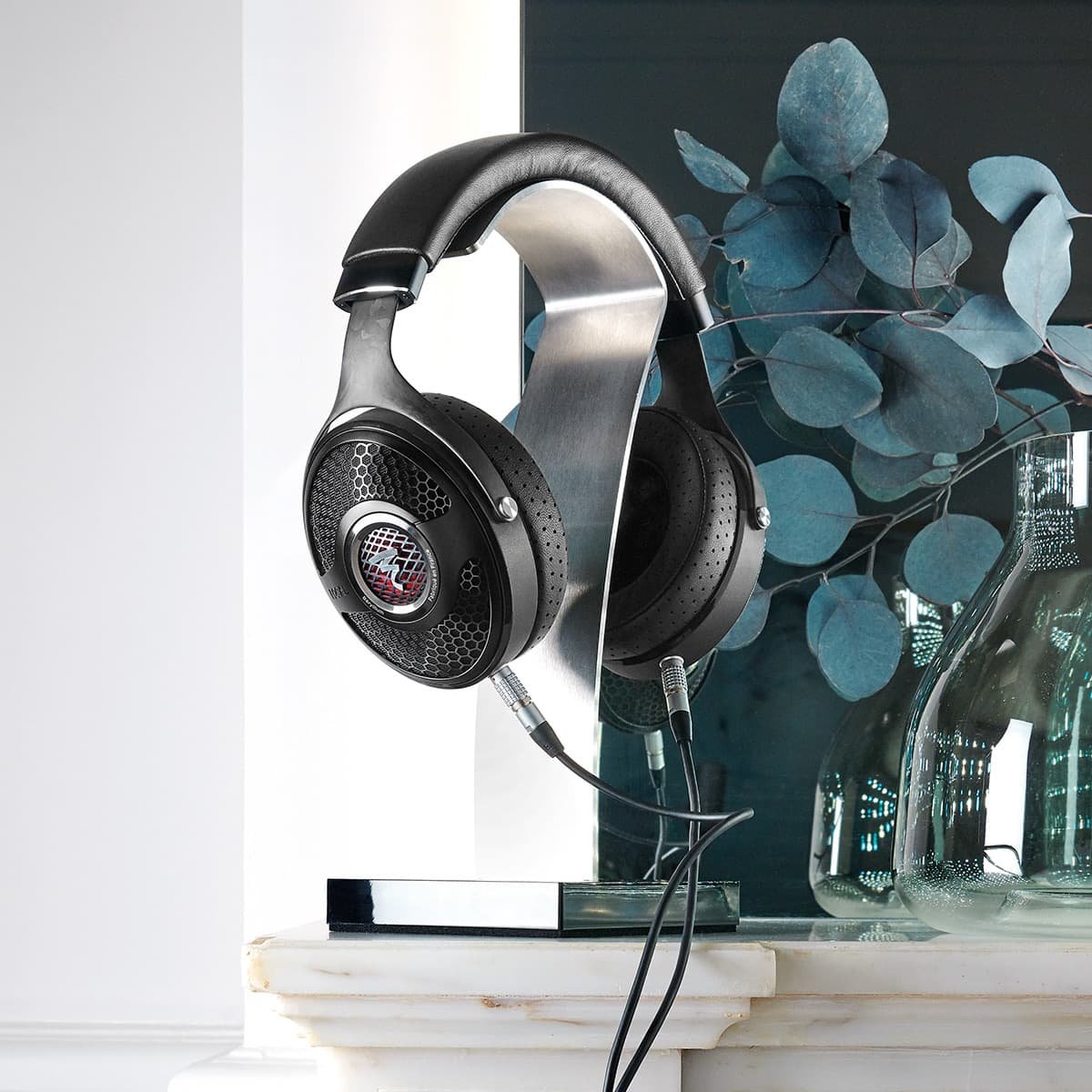 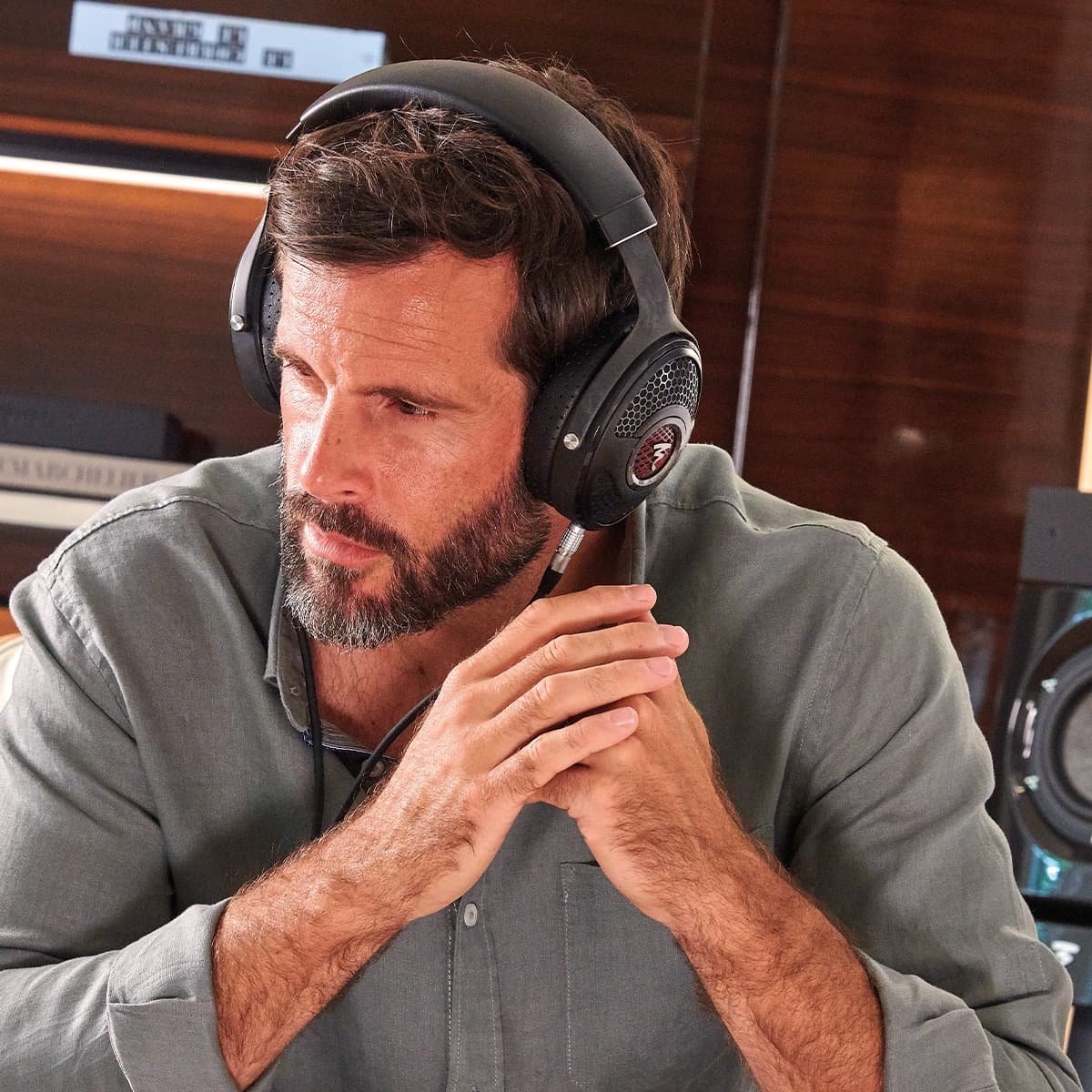 I was honored to learn that the pair I was given to test were one of the first to hit North America, and I was the third person to see them. (My dog, Oliver, was the first dog to listen to them. He’s a French bulldog so it counts).

I tested them using my McIntosh MAC6700 as part of my 2-Channel system, my Peachtree Audio Decco2 for my home office setup, and the iFi Audio GO Bar for connecting to my phone to see how they work in each environment.

I set up a playlist on Qobuz that I could access through my Roon server. By listening to the same tracks between all of the different setups let me see how the Utopias perform depending on the capabilities of the equipment they’re connected to.  (Interested in trying Qobuz? Click here for a free 2-month trial.)

The McIntosh MAC6700 provided the best performance for the Utopias so that’s where I did the majority of my listening tests. The iFi GO Bar handled the power rather well and was great to walk around with. but it didn’t give me enough juice to see the Utopias rip. My Peachtree opened them up a little bit more and was great for when I was writing for this review, but the McIntosh made them sing.

In tests like this, I slip between two types of listening, cerebral and pleasurable listening. For cerebral listening, I want to listen to tracks that have depth, instrumentation, and high production value. I want to be taken away by orchestral movements with sounds that swirl around my head like crescendos of a cymbal, small strumming of an acoustic guitar, and a pounding bassline. Play a multi-instrumental track with the Utopias and you’ll feel where every instrument is in the room, and they don’t play over each other or meld into a single sound. The separation is incredible, and I don’t feel that one portion overwhelms another. The harmony of sound is beautiful.

A track that highlighted the Utopias incredibly well was a Loretta Lynn song called “Still Woman Enough” that she does with Reba McEntire and Carrie Underwood. It starts with Loretta by herself and an acoustic guitar. The guitar is strummed in your right ear but Loretta’s voice engulfs you. At almost 40 seconds in, the bass guitar comes in and then Reba and Carrie come in with Lorretta for the chorus with a three part harmony. They’re all singing and you can hear each voice separately shining on their own. You get an experience like this with the Utopias because they are capable of creating an amazing  sound stage that is both wide and deep.

As for pleasurable listening, I listen to tracks that I’ve heard hundreds of times. Sometimes it’s like revisiting a friend who’s told the same story, but maybe this time there will be a new flourish or nuance that never made it in before. I had a hell of a time exploring new sounds in "Walking on Broken Glass" by Annie Lennox. A song I know I’d heard a hundred times, but the Utopias hit differently. I heard all the little things that I missed in the 90’s. The Utopias create a sound that makes you feel like the band is in the room with you and everything is playing in perfect harmony. Pop them on and you’ll feel like Joe Strummer is singing a rebel song right in front of you.

The Focal Utopias take the magic that was made in a recording studio and replays it in YOUR home with great accuracy and reverence to the artist's intent. This updated model continues the legacy of fine audio products from Focal, and the new driver highlights their innovation in the realm of headphones.

You need to hear these for yourselves. Think about a couple of your favorite tracks and make a trek to our showrooms to experience them for yourselves.