The latest, newest soundbar from the industry’s wireless-music-streaming-everywhere leader, the Sonos Beam, has officially made its debut. Today we are thrilled to announce it’s available right here at World Wide Stereo, and has officially started shipping.

The Beam is the second soundbar in the Sonos multi-room wireless speaker family. While it offers the benefits of a soundbar first, it also has the same wireless streaming benefits other Sonos speakers bring to the table. But unlike its bigger brother, the Playbar, the Beam is more compact and has Amazon Alexa built-in (like the Sonos One). 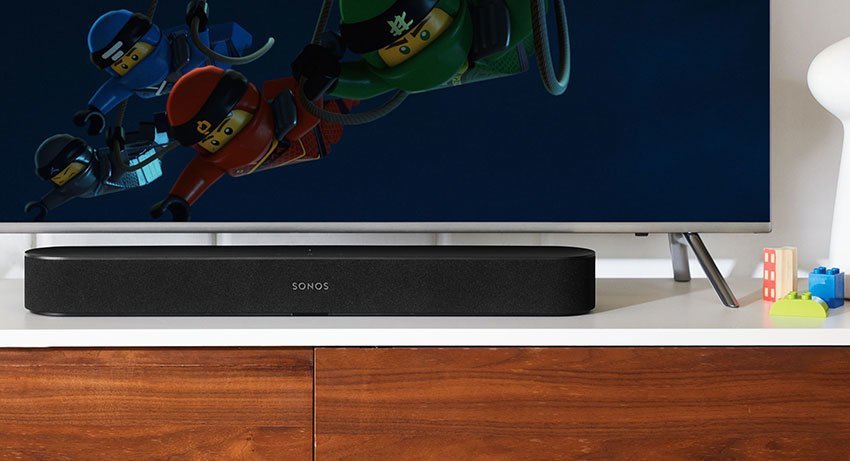 The Sonos Beam neatly fills a niche: the growing desire among consumers for a smaller, more decor-friendly soundbar that, in spite of its smaller size, still offers all the great features typically found in today’s bigger streaming soundbars – including those with Amazon Alexa onboard. With the Beam, Sonos pulls it all off with two major perks: 1) The Beam costs half as much as its equally talented, more expensive competitors, and 2) At only 2.7-inches high, 4-inches deep and 25.6-inches wide, the smaller Beam is far more decor-friendly. Minimalistic good looks are a big part of the Sonos allure, and the brand remains a favorite among interior designers. (Comes in black or white.)

• The Beam is a very good listener. Five far-field microphones hear you no matter where you are – even over very loud music. (If you want privacy, just turn the mics off.)

• Only two cords are needed to get the Beam up and running: one for power and one for the TV.

• HDMI ARC lets you easily pair your remote and control compatible TVs with your voice alone.

• The Beam is Apple AirPlay 2 compatible, so you can stream music to the Beam from your iOS device.

The Beam vs. the Playbar: How do they compare?

In spite of the same bells, whistles, and smart-streaming functionality, there is a definite difference in overall sound performance between the Beam and bigger soundbars, including the Beam’s older, bigger brother, the Sonos Playbar. The Sonos Playbar is a true LCR soundbar, meaning it has three separate speakers contained in that single bar: a left, center, and right channel (LCR). This allows the Playbar to be the front end of a real 5.1 system (when combined with separate Sonos speakers, like the Ones or Play:1s as rears and a Sonos Sub).  What’s more, the Playbar also has side-firing tweeters, which create an excellent simulation of surround sound – filling even larger rooms with immersive audio. But the Beam, on the other hand?

Depends on the room.

The Sonos Beam is a standard soundbar, and sends all audio information through a simpler speaker array that doesn’t separate left, center, and right channels. The Beam still has two drivers on each end that fire at an angle into the room to create a bigger sound “presence,” though it’s 60% smaller and 28% shorter. Bottom line: the Beam may be better suited for use in small to midsize rooms. Or, in Sonos' own words: “the Beam's compact and versatile design make it great for rooms where space is at a premium.” We agree. Larger rooms will still require the bigger Sonos Playbar, or any of our Top Sound Bars for 2022.

That said, the comparison isn’t really fair. Big audio gear usually sounds better than smaller audio gear. The Beam is still pure Sonos, and Sonos is all about awesome sounding wireless audio. In a smaller den or bedroom, the Beam packs a punch and sounds great.

And when you pair the Beam with the Sonos Sub, you get a wireless 3.1 home theater setup. For surround sound, add a pair of Play:1s or Ones to the rears. 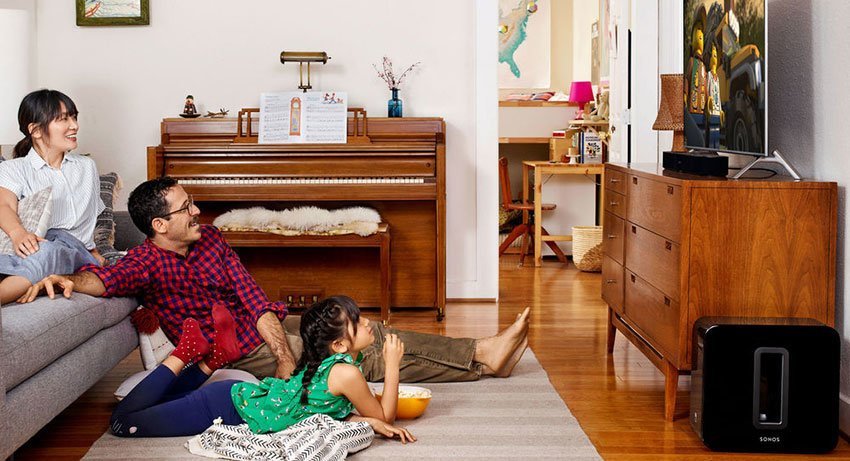 This is cool: Sonos replaced the optical cable used in the Playbar for an HDMI ARC connection, which makes some exciting new things possible. HDMI ARC acts like a speed-of-light translator and facilitator between components, with the goal of making everything smarter, yes, but easier, too. Components can send commands back and forth to each other, shuttle songs, and execute tasks — all by voice control. With Amazon Alexa already inside — and Apple's Siri and Google Assistant coming later this year — the Beam does everything from turning your TV on or off to giving you full control over any and all other Sonos speakers in the house, to easy, instant access to all your music – all by voice.

The Beam / Alexa duo operates other smart home devices as well. (“Alexa, turn up the thermostat.” “Alexa, open the blinds.” “Alexa, turn on ESPN.”) When was a particular song recorded? Alexa will tell you. Questions about the universe? Either one can help, and both are getting smarter all the time. (Interesting: recently, Alexa rolled out 2,776 new voice skills in one month alone.)

The Beam is also Apple AirPlay 2 compatible, so you can listen to any audio from your iPad, iPhone, Mac, etc. What’s more, Sonos is promising Google Assistant integration later this year. Good stuff.

The Sonos Beam is smaller than most other soundbars, really smart, sets up as easy as 1-2-3, looks great, and – like any good soundbar – will make your TV sound 100xs better. And though the Beam is, technically, a soundbar… what Sonos really made is a multi-talented portal designed to listen to humans, obey, and execute any number of exciting possibilities. And oh yeah, it makes your TV and your music collection sound great, too, for a lot less than you’d think. Order your Sonos Beam today right here, and we’ll beam one over* free of charge.  (*Sorry!)