LG is well known for making some of the best flat-panel TVs available today. But the company is no slouch when it comes to projectors, with many fine models in its lineup. Among them is the new GRU510N, a super-bright, super-portable 4K projector with a lot to offer anyone who wants a huge, beautiful image without breaking the bank. Let's hit some highlights first and then we'll dive deeper into the features. 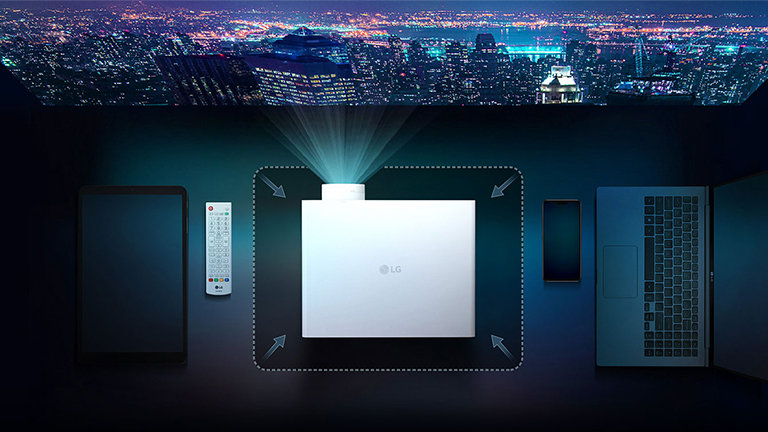 4K Splendor on the Screen

The GRU510N offers true 4K UHD (3840x2160) resolution thanks to its single-chip DLP imaging system. The imaging chip itself has a resolution of 1920x1080, but that entire pixel grid is quickly shifted around to four different positions using a technology called XPR (eXpanded Pixel Resolution). In each position, the pixels are independently controllable, resulting in a total of 3840x2160 pixels on the screen—not all at the same time, but they are shifted quickly enough that your visual perception blends them together into one coherent whole.

One thing many projectors lack is an abundance of light. Not so with the GRU510N—it boasts up to 5000 ANSI lumens of peak brightness, which is well above what most consumer projectors offer. That means its picture won't look all washed out in the midst of ambient light, one of the main objections to using a projector in the first place. No need for blackout curtains with this puppy! This projector can also fill a very large screen, up to 300", something that projectors with less light can't manage.

All that brightness is made possible by the GRU510N's laser-based light engine. Like many laser-illuminated projectors, this one uses an array of blue laser diodes. Some of the blue light is directed to a spinning wheel coated with a phosphor that emits yellow light, which is combined with the rest of the blue laser light to form white light.

Aside from high brightness, one of the main advantages of a laser light source is its longevity. The laser in the GRU510N is expected to last up to 20,000 hours, which is equivalent to about 6000 movies! If you were to play videos on this projector for eight hours a day, the laser would last for seven years. Even better, the laser maintains its brightness throughout its lifespan, unlike conventional projector lamps, which dim to half their initial brightness after only 1000 hours or so.

Yet another benefit of high brightness is the ability to present images in high dynamic range (HDR). The GRU510N supports content in the HDR10 format, which is among the most common HDR formats. HDR images have brighter highlights and deeper blacks, giving you an eye-popping, punchy picture that makes standard dynamic range look positively dull by comparison. And most projectors can't get nearly as bright as this one, making it perfect for HDR. 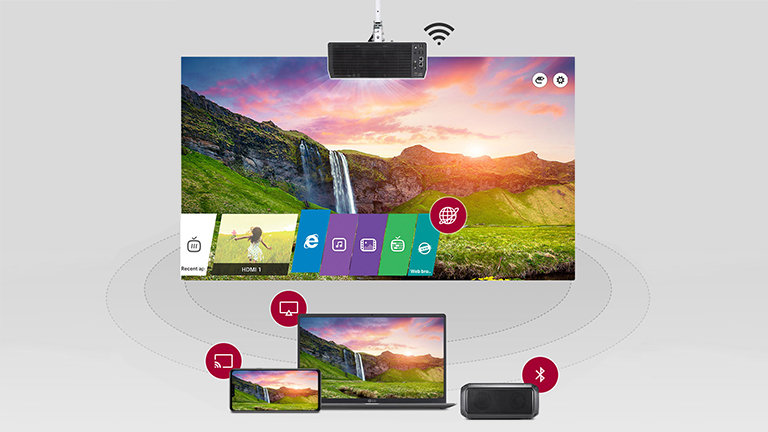 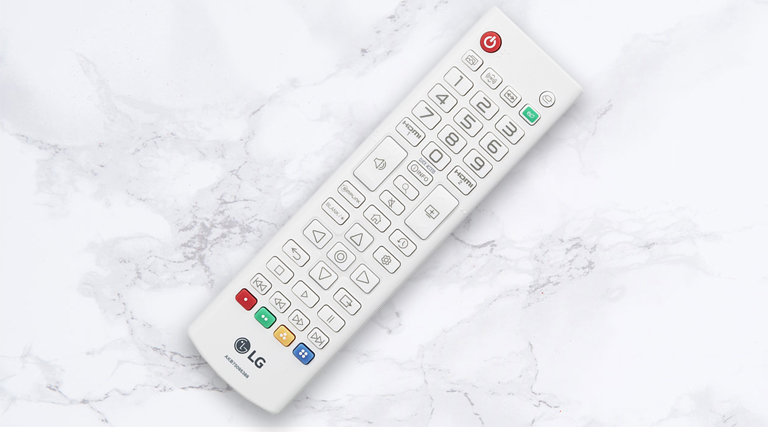 Measuring only 14.6" x 12.8" x 6.1" and weighing a mere 21.4 pounds, the GRU510N is small and light enough to be moved from one location to another and set up just about anywhere, from the living room to the back yard for a movie night under the stars. And once you decide where you want to put it, there are several features that help you easily align the image to the screen.

First, the GRU510N provides a 1.6x zoom lens, which lets you make the image larger or smaller to fit the screen. And unlike many projectors in its price range, this one provides horizontal and vertical lens shift. If you can't place the projector perfectly centered on the screen, you can shift the lens up or down, right or left, to align the image. Projector owners greatly appreciate that flexibility.

Most projectors offer a feature called keystone correction, which squares up the image if the projector's light beam isn't perpendicular to the screen -  the GRU510N takes this even further. Called 12-point keystone adjustment, it lets you independently adjust the alignment of 12 points at the edges of the image, which results in far more natural and precise alignment. However, keep in mind that all keystone correction, no matter how sophisticated, reduces the perceived resolution, so it's best to avoid it if you can.

Even though the GRU510N is portable, you can also permanently install it on a shelf or on the ceiling using an optional mount. This is the best way to optimize the image for a given screen in a given room, and you only have to perform the set up once.

The GRU510N provides an extensive selection of connections on the back, including two HDMI inputs, one of which supports ARC (Audio Return Channel). ARC sends audio from the projector along the same cable that carries content to the projector.

For example, you might connect the HDMI output from an AV receiver to the HDMI/ARC input on the projector. When you watch content from, say, the projector's onboard web browser (more in a moment about that), the audio is sent to the AV receiver along the same cable. Alternatively, you can use the HDMI ARC input as an audio output to a soundbar. ARC is an incredibly useful, flexible part of HDMI that few projectors support.

Two USB ports let you connect USB storage devices such as flash drives and hard-disk drives. The GRU510N has a built-in media player that can render audio/video files, music, photos, and even computer documents. The USB ports can also provide power (5V/0.5A) to streaming sticks such as a Roku or Fire TV Stick plugged into one of the HDMI ports.

Then there are two RJ45 ports, which is the type of connector used for Ethernet cables. One of those ports is indeed an Ethernet port, while the other is designated as HDBaseT. What the heck is that? It’s a relatively new standard for transmitting audio/video, Ethernet, USB, and control signals. It even conveys up to 100W of power, all on a single cable! HDBaseT is not widely implemented in consumer products yet, but if it is in the future, the GRU510N is ready for it.

You can control the projector via Ethernet or HDBaseT, or you can use the RS-232C port to integrate the GRU510N into a control system such as those from Control4 and Crestron. Alternatively, you can simply use the included IR remote. Having several ways to control the projector is another example of its flexibility and adaptability.

The final connections are audio-related. A 3.5mm audio output is labeled for use with  headphones, but it can also be used with small external speakers. The GRU510N also provides the ability to send audio to external speakers or headphones wirelessly via Bluetooth, which is mighty cool.

We should note that the projector includes a pair of built-in speakers, each powered by a 5-watt amp. You can even send audio to the onboard speakers via Bluetooth! That makes the projector completely self-contained, which is very handy in some circumstances, but we recommend that you use external speakers whenever you can, since the built-in speakers can't get very loud or reproduce deep bass.

In addition to HDMI and USB sources, the GRU510N can get content from other devices on your home network, such as computers, media servers, and any device that is compatible with DLNA (Digital Living Network Alliance) standards. Even better, the projector can access that content using a hard-wired Ethernet connection or Wi-Fi, though for best results with audio/video material, use a hard-wired connection if possible.

Another source of content is your smartphone or tablet—in fact, any device that supports Miracast. This lets you mirror the screen of your mobile device on the projector screen, which is pretty darn cool for things like making video calls larger than life.

Unlike smart TVs, the GRU510N does not have built-in streaming apps for services such as Netflix, YouTube, etc. However, its webOS operating system does provide an integrated web browser along with the apps that let you play all sorts of content from USB and network-attached devices.

There's an awful lot to like about the LG GRU510N. With 5000 lumens of peak brightness, it knocks the socks off most consumer projectors, letting you enjoy a bright, vivid picture with the lights on—black-hole man cave not required! That much brightness also serves HDR content extremely well. Not only that, a resolution of 3840x2160 means razor-sharp images even on a huge screen up to 300". And the laser light engine will last for many years without ever having to change an expensive lamp.

The relatively compact case and advanced alignment controls, including zoom lens, horizontal and vertical lens shift, and 12-point keystone correction, lets you easily set up this projector just about anywhere. And its flexible content options let you enjoy everything from movies to photo slide shows to anything you can point its integrated browser to online.

Perhaps best of all is the price: $3,999.99. That's way less than many projectors that don't offer nearly as much brightness or flexibility. If you're thinking of dipping your toes into the world of projectors—or you're looking to upgrade your existing light thrower—the LG GRU510N is worth a serious look.