If you’re reading this, it’s a good bet two things are true: 1) you love that cinematic, Hollywood experience – watching movies the way movies are intended to be seen: BIG. 2) you know that no TV, no matter how good, or how large, can replicate the same level of blow-your-mind / hold-on-for-dear-life impact you get in a genuine, big-screen movie theater. And if you’re nodding “oh hell yes” right now – and/or considering a projector instead of a TV as your theater centerpiece – we’ve got some breaking news that just may make your day. Sometime in mid-January 2021, possibly in time for CES, LG will officially launch the new AU810PB, a 4K, HDR smart projector that – on paper – looks to leapfrog every other projector in its class with respect to performance, simplicity, and wireless connectivity. 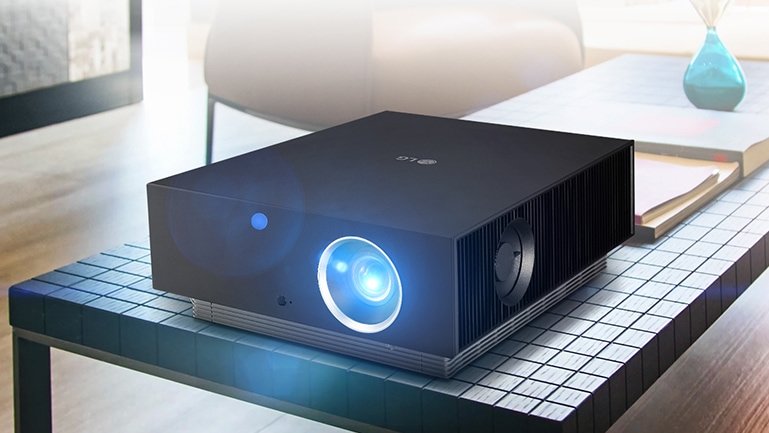 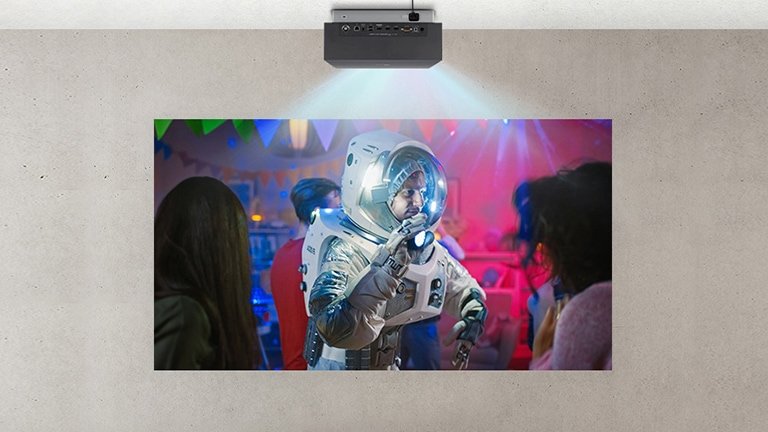 There’s a lot to talk about here, and to get it right, we asked LG Senior Product Trainer, Gregg Lee, for the deets.

Gregg comes with 30 years’ experience in the Home Entertainment Industry. He’s a big-time movie fan (Gregg actually tried to buy an old movie theater as a kid), he loves that authentic, theater experience, and he was one of the first, anywhere, to build a projector-driven home theater in his own home in 1996. (Black walls and ceiling, everything soundproof, cushy theater chairs, the whole nine yards.) Gregg is currently on his 7th projector and he’s planning to make LG’s AU810PB his eighth.

WWS: Let’s start here… how much?

WWS: And that extra grand buys me… what?

Gregg: WISA, onboard, which is an industry first. And that’s huge – a smart projector that offers 5.1 high-resolution wireless audio, auto display calibration (with CalMan), IP support for all the major home networking apps… so you can boot up your favorite show or turn off the lights or check your security system, all by voice alone… something no projector could do, until now. (WISA = Wireless Speaker and Audio.)

WWS: Both also come with Amazon Alexa and Google Assistant?

Gregg: Absolutely. All around, both models are phenomenal values.

Gregg: No, really… this is not a parity product – the AU outperforms projectors that cost thousands more… and I’d argue that right now, nothing else is as futureproof. Keep in mind, projectors in general are typically designed to work as display devices only, meaning that the projector is only expected to produce the image from some HDMI device connected to it. In that regard, projectors are more like computer monitors than Smart TVs. LG breaks from that tradition with a fully connected / Smart TV experience – within a home theater projector.

WWS: So this is a first?

Gregg: Some competitive projectors have started to integrate smart functionality, but it’s often rather crude or rudimentary in implementation. In some cases, apps have only allowed 480P or HD quality streaming without HDR… even if the streaming service offers higher capabilities like 4K and HDR, even in 4K projectors. With LG you will get the highest level of streaming performance that service offers and our product technically supports.

WWS: Okay, let’s talk hardware. The single most important thing to our customers is picture quality, so talk about the AU’s dual laser light source. How and why is that a good thing?

Gregg: For starters, it does away with the old RGB spinning wheel approach, which means better color fidelity, better color saturation, and no more “rainbow” effect. The end result is a wider color gamut with deeper/richer saturation – a near-perfect match for the color gamut utilized on HDR content, which is definitely noticeable. This is a “not-so-subtle” improvement.

WWS: And how does the AU’s 2700 lumens stack up against similarly priced competitor products?

Gregg: 2700 lumens is a solid figure for today’s home theater projectors. Add to that, a dual laser (as opposed to lamp-based ) comes with other advantages: fast start-up, fast shut-down, a 20K hour lifespan which means you won’t be replacing lamps over the product life.

WWS: A lot of customers liken lumens to horsepower, where more is always better. Is that the case?

Gregg: Yes and no. If you want to drive a really big screen or watch with ambient lighting in a room with windows, then yes, the extra light horsepower can really make a difference. But brighter isn’t always better. If your native contrast isn’t high, and/or you don’t have an iris or adaptive contrast system in play, bright scenes will look great, but dark scenes will be hazy and washed-out due to elevated black levels.

WWS: Adaptive contrast allows the projector to analyze every frame to reset for an optimal black level. Correct?

Gregg: Exactly. And it’s unique, but not exclusive… though it’s indicative of a higher performance projector… and another differentiator, compared to models that do not modulate the intensity of light sources based on scenes. If a projector is too bright during a dark scene, black and shadowy areas can appear foggy. By lowering the illumination during dark scenes, black renders more deeply and creates a richer / darker appearance… which makes for a more realistic representation. I was really jazzed to find out that both iris control and adaptive contrast were incorporated into the new AU810BP.

WWS: Speaking of iris control, LG’s promotional video notes: “a user can control brightness from the iris mode to get a better black level.” Is that really unique?

Gregg: Again: unique, but not exclusive, as most competitors don’t offer this control option. The benefit: you can tune the brightness of the image to match the environment, so lower for dark rooms or brighter for rooms with ambient lighting.

Gregg: Digital Cinemas are 4K and look amazing with giant screens. In fact, 4K has enough resolution to sit 1-foot back for every 15” of diagonal, so a 150” screen can be viewed from around 10 feet, and a 300” at 20-feet. Any closer and the pixel structure will become visible. With a 300” screen, the screen height = 148” or over 12 feet tall; more than 50% taller than a typical 8’ ceiling. Here’s the deal: with projectors it is all about balance… and with 4K, there is plenty of resolution for most customers to sit comfortably or even uncomfortably close to a very large screen and have an amazing experience. So under normal home theater setups with more reasonable screen sizes, there is certainly more resolution than necessary to make sure the image is sharp in the front row.

WWS: Bottom line, which would you recommend: a high-end OLED TV or a projector?

Gregg: I can’t answer that… it depends on your room, what you like to watch, your budget, your personal tastes, etc. But let me ask you a question in return: do you know what it’s like trying to land a helicopter on the deck of a nuclear-powered, Nimitz-class aircraft carrier, at night, during a typhoon?

Gregg: Then try this: go to a World Wide Stereo store and ask to see, on a high-performance projector, the “at sea” scene in World War Z… because it will put you on that flight deck in a way no TV can. Or: watch the battle scene at the beginning of Gladiator – amazing on any TV – but on a quality projector, it’s an out-of-body experience. Plus, you come away with a much greater appreciation for the genius, power, and grandeur of the Roman empire. Here’s the deal: right now, Netflix, Amazon, Disney, and others are pumping out high-quality content that, in normal times, would debut on big AMC theaters around the country. So your only way to see it – the way you’re supposed to see it – requires a projector that fills up your peripheral vision for a thoroughly immersive experience. Don’t get me wrong – The Mandalorian on a big LG OLED TV is breathtaking. Gorgeous. But again, when a high-quality picture fills your peripheral vision, excluding all else, the overall experience is simply more powerful.

WWS: You’ve now cited 3 movie references to make your point: World War Z, Gladiator, and The Mandalorian. Do you ever watch romantic comedies?

Gregg: What’s a romantic comedy? Does Shrek count? Or Raising Arizona? (Kidding.) Of course, I’ll watch a good romantic comedy and anything Pixar on the big screen = goosebump city. I’m a photographer, videographer, video editor, and rabid movie watcher… so yeah, I eat this stuff up. Movies are what got me interested in this industry.

WWS: So I’m guessing you own a real popcorn machine.

Gregg: Let me tell you about the benefits of coconut oil for popping... 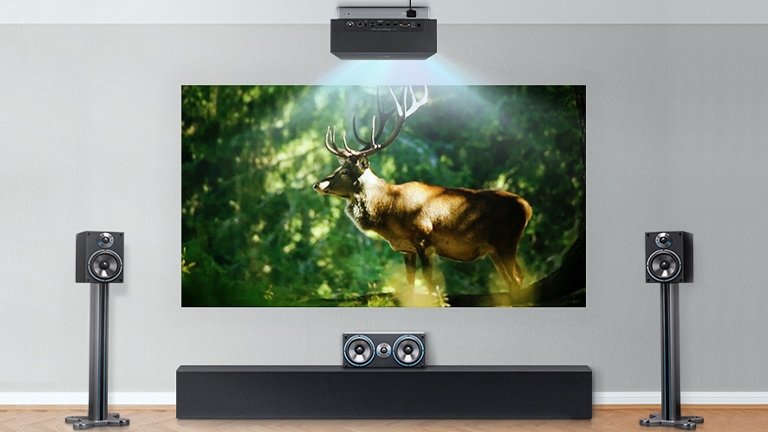 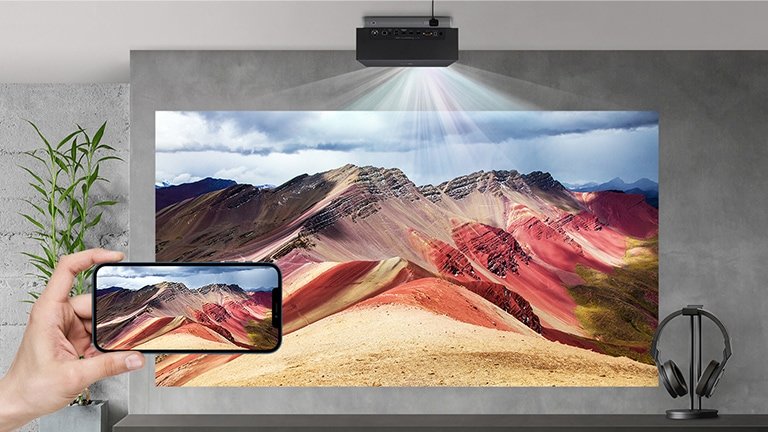 So, what did we miss?

If you’d like to learn more about the LG AU810P, click here. And if we missed the one question you’d like answered (sorry about that) just ping us or call us and ask away. For what it’s worth, we often talk to customers who struggle with the same dilemma: “do I go with a flat-screen TV or a projector as my home theater focal point?” Our advice: don’t make that decision until you see both, side by side. And for that, we’re more than happy to set up a private demo in one of our theater rooms, so you can run your own little head-to-head competition. The AU810P is on our Best Home Theater Projectors of 2021 award list.

With WISA onboard, LG’s new AU projector represents a smart step forward for film-lovers and fans of projector-driven home theater... and at only $4K, it’s going to give a lot of high-end OLED TV shoppers pause for thought. Our collective bottom line: if you’re looking to create an immersive, AMC-like, home theater in a basement, den, or spare room, we recommend making LG’s new AU810P projector a part of your consideration set.

At a quick glance, here are the differences the AU810P offers over the HU810P:

Additional features not available on the HU810P:

World Wide Stereo is home to some 80+ industry-leading audio/video professionals who love what they do, and talking about it, too. We opened our doors in 1979, gained a small yet diehard following, won a slew of national awards for everything from killer home theater installations to customer service, grew the business online… and today we enjoy a faithful following of like-minded TV-watching, music-listening, gear-loving defenders of fun for the whole family. Our only rule: no one leaves unhappy. For more on us, click here.