Flaunting slim profiles and a $1,000,000 Connected Equipment Warranty, PowerQuest 2 and PowerQuest 3 from AudioQuest make high-performance and protection more attainable than ever before.

Their non-sacrificial surge protection prevents both high voltage and current from causing damage to your equipment, which many traditional surge protectors do not offer. Furthermore, the PowerQuests can filter more noise and distortion for noticeably improved performance from your connected devices. 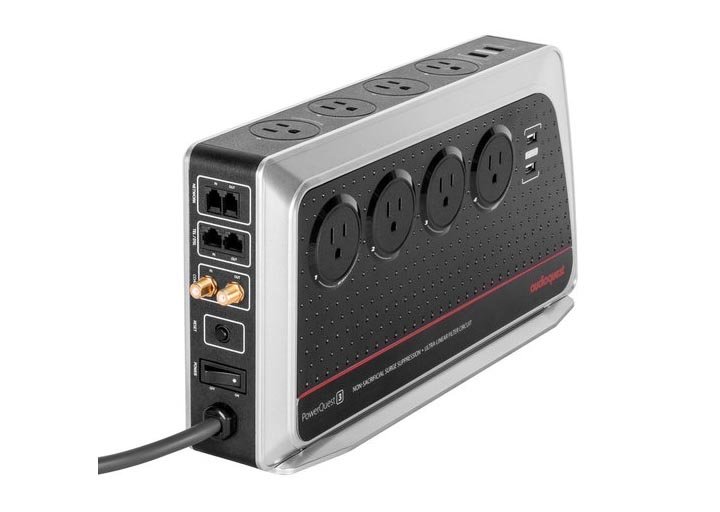 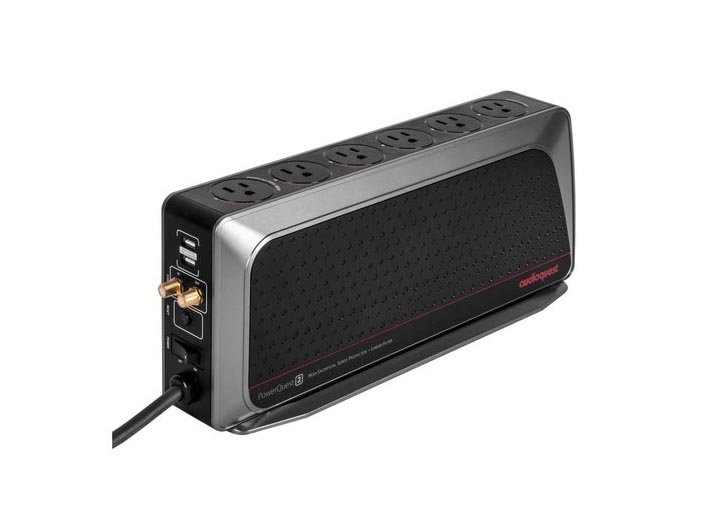 And those technologies that are in the Niagara series have now trickled down into here, into these PowerQuest 2 and the PowerQuest 3 AC Power Conditioners. So, what is a power conditioner and why do we need one? Well, first of all, we need enough plugs to plug everything in. The average system has between 6 and 10 things that you need to plug in. And if you look behind your TV stand there, what do you have, two outlets right there?

So that satisfies that first need of having enough plugs to plug everything in. Second, it's great to have surge protection. In your home, electricity has anomalies all day, too much, too little, comes in noisy, and all that. You can have a lightning strike or a transformer blow down the street. All of those things are scary events for today's sensitive A/V gear. These right here have surge protection built-in, non-sacrificial surge protection.

I'll explain that a little later. But this will keep all of your stuff safe. The last thing that these things do which make them so great is they actually have AC power filtration. Think about tap water, people who filter their tap water, or your car, you have an air filter and an oil filter in your car. Could you imagine all of those bits of debris getting into your engine over the course of a couple of years?

Your engine would completely fail or fry. It just...it wouldn't be good. You wouldn't think about doing that. The same is true for today's sensitive equipment. Being able to filter out all of that stress, and all that noise, and all that gunk out of your system, it prolongs the life expectancy of it because it's going to last a lot longer and perform like the people who designed it want it to perform.

Both the PowerQuest 3 and the PowerQuest 2 were designed by Garth Powell. He is the Senior Director of Engineering. And they've been designed with all of the high standards that AudioQuest has for all of their products. Some of the technologies that you'll find in both of these, let's start with the power cord. They will both come with an NRG-grade power cord, which has been reviewed by Stereophile as one of the best power cords in the industry.

So, those are designated specifically for video devices. Next, you'll find plugs on them for a high current output. Now, this input was designed and tailored specifically for things with amplifiers. So, your receiver, your power amplifier for your surround system or your stereo system, your subwoofer or powered speakers. All of these devices have amplifiers in them.

So, you want to make sure that you plug them into these custom-tailored outlets. Last but not least, you will find your source inputs, which just have a linear filter on them. These are great for things like cable boxes, streaming boxes, game systems, turntables, CD players, Blu-ray players, all those little sources that feed your amplifier and your TV.

Both of these products will have safety features that you'll find in the Niagra series, that being the non-sacrificial surge protection, the extreme voltage shutdown, and a one-million-dollar connected equipment warranty. So I mentioned I was going to talk about the non-sacrificial surge protection. So here's how that works. There are two kinds of surge protectors out there, ones that if it takes a big enough surge, the unit itself just dies, it lays down in front of that surge and dies for you.

The equipment itself, the surge protector, the equipment's fine, the surge protector dies. It needs to be replaced. The Niagara series and now also the PowerQuest 3 and the PowerQuest 2 are non-sacrificial, meaning, if there's a big enough surge that comes through, these will not lay down and die. They will take it and continue on. That circuit has actually been tested multiple times by sending 6,000 volts and 3,000 amps to these things repeatedly to make sure that that circuit works for you.

It won't see that harmful voltage. The PowerQuest 3 and the PowerQuest 2 will give you three different ways of actually storing this. You can put it on its supplied stand, as you see here, and it could sit behind your equipment. On the back of it, you actually have hooks here or holes that you can wall-mount it, or you can lay it down flat like a source component in your rack and just lay it in your rack. It gives you a lot of ways to put this in.

One of my complaints in the past with power centers and conditioners is that the ones that go behind the rack are always so big and bulky and you can never find anything. So, real nice clean design. I love the design of these and I like the options that they give you to actually house this thing. I mentioned the power cord before on both of these. They are an energy power cord and they're 7 feet in length on both models, the PowerQuest 3 and the PowerQuest 2.

Maybe one for a TV, one for a projector. Both of them will give you four of the source inputs. On the side of the units, you'll actually see that you get some signal protection, okay? They'll both have a coax in and a coax out. However, on the PowerQuest 3, you're going to get a telephone line in and out. You're also going to get your network jack or your router connection in and out on that as well.

My first test on all these things is I plugged them into powered speakers. I want to hear, does this really make a difference with that amplifier and those speakers? And the difference is instantaneous. When you plug those powered speakers into these high-current outputs right here, compare that to, like, a power strip you grab from a hardware store, it's so much cleaner, so much more wide open. It's an amazing difference.

I brought everybody in that I could to hear that difference and everybody heard it. I didn't tell them what I was doing. I just said, "Listen to the difference." And everybody was, "You know, that's better.That's better." So, great, great example of what you can do and how this thing can improve your audio/video system. And being that this has that non-sacrificial surge protection, that unit that's just going to last forever, it's going to take a big surge and be there for you the next day, this is really a lifetime purchase, something that you'll have with not only this system, but your next system and your next system after that.

We offer free shipping, a 60-day return policy, and we're authorized dealers for everything that we sell here. If you have any questions, you can please leave them in the comments section below or you can call or email us at any time. Please remember to subscribe to our YouTube channel. This is Adam with World Wide Stereo reminding you to listen to music every day. So long."