Sony’s latest OLED TV,  the A9G, features a masterful display with exceptional black levels and over 8 million self-illuminating pixels. With Sony's Picture Processor X1™ Ultimate and Pixel Contrast Booster technology, you get bright, vibrant colors, absolute blacks, and stunning contrast to bring all of your favorite shows and movies to life. Plus, the Acoustic Surface Audio+ brings 2.2 channel sound right from the screen, providing the best built-in audio experience for any flat-panel TV. 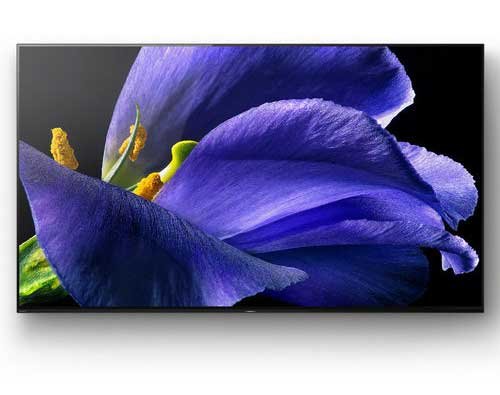 This is also a smart TV so you'll find all your favorite apps in there, and it can connect to the internet with either a Wi-Fi connection or a hard-wired LAN connection. This is Sony's best TV available. It has over eight million pixels on it, and it looks great for watching sports, movies, pretty much anything you want to throw at it. So now that OLED TVs are a few years old now, certainly, there are other manufacturers that make them, but Sony I think does the best job with it.

They have recently upgraded the processor chip in here to the X1 Ultimate processor. So what does that do for you? So a new and improved X1 Ultimate processor does a couple things for you. But first and foremost, it improves the picture quality. If you think about when video games first came out and the six-bit or eight-bit color graphics that we had didn't look so hot to where we are today, that's one big improvement in a processor, which will help you with your regular TV looking good, movies looking more accurate, pretty much everything about the TV.

So that's a great thing to have the new X1 Ultimate chip from Sony in this TV. If you're a big gamer, this may not be the best TV for you, although it does a fantastic job for just normal gameplay. But if you're a real serious gamer like you compete over in the weekends and stuff like that, there are panels that are made specifically for that. But the average gamer is going to find this TV perfect for playing their games on.

So let's talk about the inputs that are on this TV, and you got a lot of them here. You have four HDMI inputs, three on the bottom, one on the side. One of them will support what's called eARC, which is Enhanced Audio Return Channel. That allows for the Dolby Atmos or some of those upgraded surround sound formats if you're streaming from your TV to be passed down to either your soundbar or your surround sound system.

You will get a digital optical output, which you'll find on the bottom. You'll also find a headphone or analog audio output, which can be helpful for connecting to things like wireless headphones, so you can use your headphones at night and not listen to the TV. Now talking about speakers, this TV has one really cool feature on it. The entire surface of the screen is the speaker. It's called the acoustic glass surface.

So when you play or turn up the volume, you can actually feel the front of the screen vibrating. That's your entire speaker. So, as a standalone TV, if you didn't want to get a soundbar or have a surround sound system, you're going to get some pretty awesome sound coming out of this guy. The other really cool thing you can do with it is if you have a surround sound system, and as you can see, you don't have much space to put a center channel speaker in front of the TV here because it sits so low.

On the side of it, you have an input that you can connect your receiver center channel speaker output directly to this TV. So, you can utilize this big speaker on the front panel here to be your center channel speaker as part of your traditional wired surround sound system. This TV still offers an analog video input or a composite video in. However, you do need to purchase an external dongle to do that.

So this Sony TV has the Android software, and it has the latest version of Oreo, and this is also Google Assistant enabled. Sony did do a nice upgrade to the remote control, the front, it looks a lot cleaner-looking. And the back has a nice textured finish, so it feels nicer in your hand. Also, on the front, you see here, I like the direct access to Netflix or the Google Play Store, and you have your Google Assistant engaging button right here.

Included with the TV is the pedestal that you see here. If you do want to a wall mount, you have to buy additional wall mount, not that hard to do. I would recommend the articulating mounts so when you mount the TV on the wall, you can actually pull it away from the wall so you can access all the connections and the power cord back there and things like that. Just makes it easier to work with. So, as part of the X1 Ultimate processor upgrade, that also helped with their menu system.

Now, you'll notice that their menu system is a lot more speedy and responsive. It comes up instantly now, and you're able to really fly through things really quickly to find whatever you're looking for. You can move these around if you wanted to. If you wanted to, say, Prime was your favorite streaming service, you could put that first, Netflix second, whatever you want. So, a lot of customization available in this menu. And because of that new X1 processor, it moves a lot faster.

New to the Sony TVs this year is a video mode called Optimized-for-Netflix. So while you're watching Netflix, if you can hit the Settings button, you can put the TV in a picture mode that has been optimized specifically for watching Netflix content. This does a fabulous job at getting the color accuracy right, all the contrast, and the brightness settings.

It looks really terrific. One of the things you may read about OLED TVs is they have this maybe issue with what's called burn-in. Now, that's not entirely true. It does have the chance of getting what's called image retention or burn-in, but Sony TVs specifically have kind of an anti-burn-in feature. The TV knows if there's a static image on it, and it'll start shifting the pixels around as to not try and get what's called that burn-in on there.

So, good safe mode on here. At normal TV watching habits, you're not going to have any problems with burn-in or any image retention issues. Another thing about the OLED TVs is that you're able to see this from any angle, doesn't matter where you're sitting. If you're directly in front of it, if you're off to the side a little bit, not a problem. With these TVs, you can see it from any angle. The brightness stays the same, the coloring stays the same.

It's accurate from anywhere in the room. Overall, this is one of the most accurate TVs that we have here at World Wide Stereo. It does a fabulous job with movies and watching TV on it. I'd say, in your room, you probably want to make sure that you control your light a little bit. If you have a lot of ambient light, you'll get a little glare on here. Now, they have done a lot of things this year to help reduce that glare, but you sometimes can get a little purplish tint to it but not really distracting.

The TV's brightness will overpower that. If you're watching at night, the contrast on this TV is about the best I've ever seen. It's a jet black screen, great colors are popping. Again, one of the most accurate TVs that we have here at World Wide Stereo. This is the Sony A9G OLED TV. It will be available online at worldwidestereo.com. Or, if you happen to be in the area, you can stop by our Ardmore or Montgomeryville, Pennsylvania showrooms.

We offer free shipping, a 60-day return policy, and we're authorized dealers for everything that we sell here. If you have any questions, you can leave them in the comment section below, or please call or email us at any time. Please subscribe to our YouTube channel. This is Adam with World Wide Stereo reminding you to listen to music every day. So long."