A new kind of Beetlemania has hit the World Wide Stereo shelves. The Beetle is the latest digital-to-analog converter (DAC) from AudioQuest, as part of their “critter” line of audio accessories.

The Beetle is a multi-purpose, Bluetooth enabled digital-to-analog converter that makes everything sound better, from any source, for less than 200 bucks. And because music that sounds better is always a good thing, we wanted to share our take on why this Beetle is one you'll actually want in your home.

If you know what a DAC is, you can skip this part.

Not familiar with digital-to-analog converters? Here’s a quick primer — starting with the difference between analog and digital.

The difference between digital and analog files.

An analog signal is a series of electrical pulses that mathematically equal the waveform of the sound. An example: the grooves of a record contain the actual engraved soundwaves as tiny bumps and wiggles – and moving a needle through those grooves cause magnets to vibrate, physically recreating the original sound. Conversely, a digital signal is a computer file: a soundwave translated and converted into binary code – 1s and 0s. The music on your phone or hard drive or any streaming device is a digital signal.

That still doesn’t tell me what a DAC does...

DAC stands for Digital to Analog Converter, and it does exactly what the name implies. A speaker needs to vibrate according to the sound wave. Giving a speaker a digital signal is like fueling your car with crude oil. It’s the right substance, so to speak, but it needs to be prepared and refined. And that’s what a DAC does – it takes the digital file and interprets the encoded information, turning those lines of code back into the true analog waveform they represent. (Like the grooves on a record.)

From there, the newly crafted analog signal is sent to the amplifier which combines the signal with enough power to cause the speaker to replicate the desired sound. In short, analog signals = actual sound waves, and digital signals = a computer file that describes those sound waves.

But my music sounds okay already, so do I really need a DAC?

Fact is, you already have a DAC. Or, more likely, several. The soundboard in your computer has one, your Sonos speakers have one, your smartphone or iPod has one – anything that can play a digital music file already has one – built right in. But — and this is a big but — most digital devices skimp when it comes to DACs due to budget, available space, or other concerns. Even some of the pricier digital devices on the market come with inferior DACs inside. What we offer: better DACs – as in way WAY better. And the new Beetle from AudioQuest is a prime example. 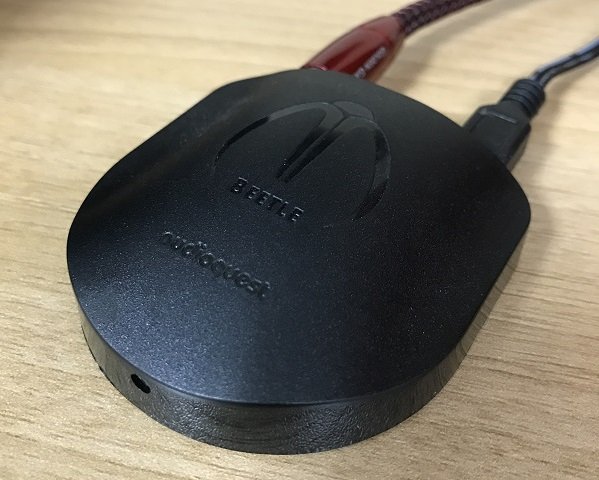 So what’s up with this Beetle thing?

The Beetle is the newest DAC from AudioQuest – an optical-Bluetooth-USB digital-to-analog converter and the latest critter in AudioQuest’s Critter Collection of audio accessories. And adding one to your system will absolutely improve / enhance everything you listen to.

Since the Beetle requires power, it's less portable than its cousin, Dragonfly. So it's the "I'm gonna live at home with your system" kind of device. And though you can directly connect to it via the optical input, what really sets this critter apart is Bluetooth technology. Sure, Bluetooth is convenient, but often modest in quality - there's a resolution ceiling. But, with the Beetle, the fidelity of what it delivers wirelessly is remarkable.

How much better, of course, depends on your particular setup – your amplifier, your headphones, your speakers, even your music files (e.g.; MP3s vs. hi-res file formats). Results can be dramatic – like going from a Honda Civic to an Audi A5. Or from porterhouse to filet mignon. Or from Triple A to the Big Show. You get the idea.

Though somewhat less dramatic, those with killer systems will still hear and appreciate the kinds of subtle acoustic improvements that only come via a top-of-the-line DAC like the AudioQuest Beetle. (Not so long ago, true hardcore music lovers were our biggest DAC customers. These days, as digital music consumption increases, we see all types asking about and buying DACs.)

Our e-commerce team demoed the Beetle with a pair of Totem Mites and an older Marantz receiver (below).
You can test out the difference the Beetle makes anytime on any speaker, headphone, or source at one of our our showrooms. 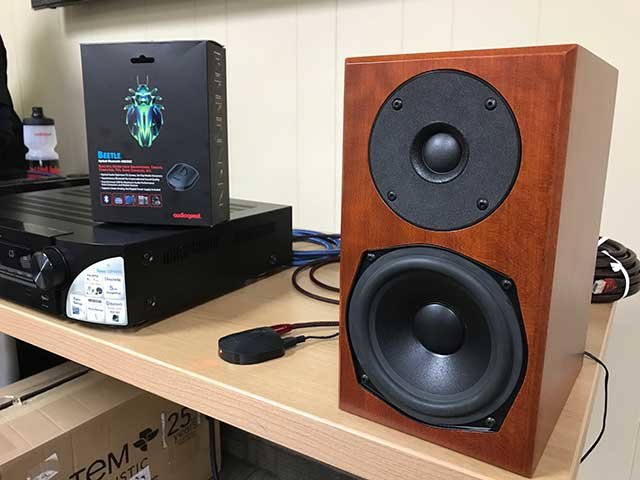 Is the Beetle hard to install?

Not at all. The Beetle goes between your source and your amplifier. To connect the Beetle to your amp, simply use an analog cable. Once connected, the Beetle’s built-in Bluetooth receiving antenna looks for a signal. Just open your Bluetooth menu on your phone, and the Beetle will appear as a device — just like headphones or a Bluetooth speaker would. Choose it, and the Beetle will convert the signal to analog and send it along to your sound system (your preamp or integrated amp). And voilà, high fidelity audio to your ears.

Not using Bluetooth? A USB or optical cable connects the Beetle to your source.

For more inspiration, check out this guide from our friends at AudioQuest:

A DAC with Bluetooth is a big leap forward, and we suspect most will use the Bluetooth option to connect to their phone. But Bluetooth is an either/or option, so you can also connect directly to your sound system (as described above) for optimum results. Once it’s out of the box, you’re up and running in less than a minute.

So far, everyone loves it – and we’re betting you will, too. (Want to impress the music lover in your life? Get them a Beetle for their birthday or this holiday season.)

Be a Beetle fan and go for it, right here.