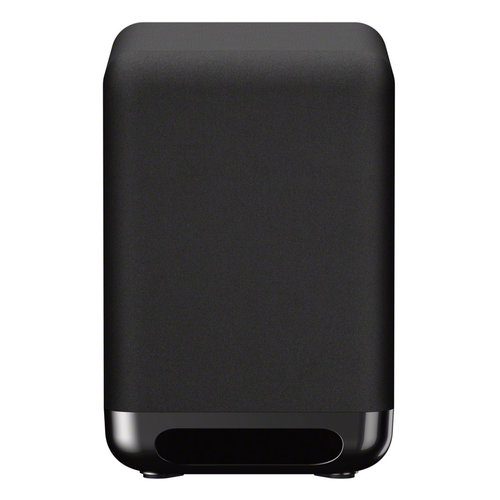 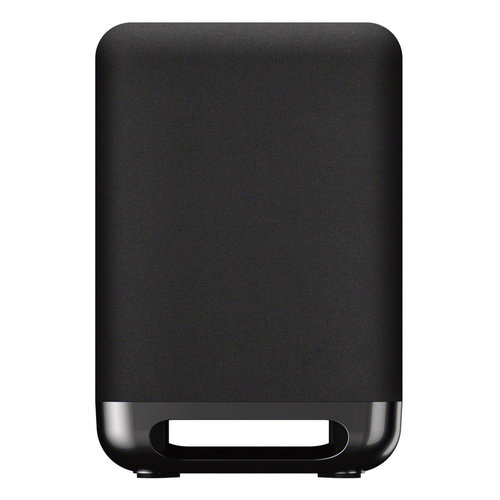 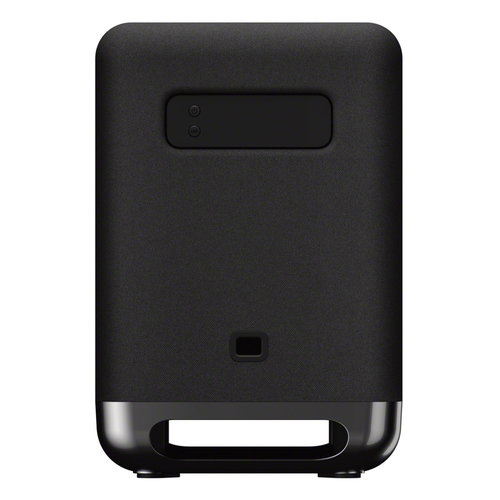 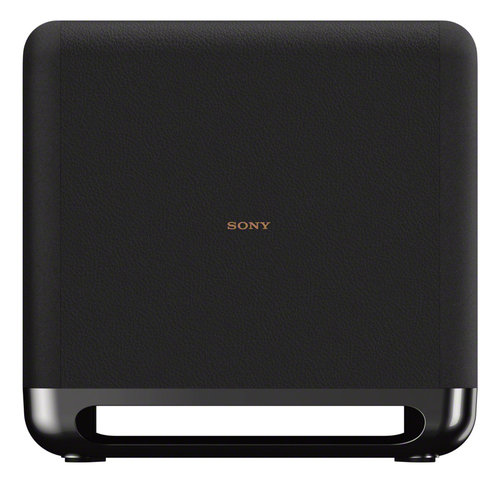 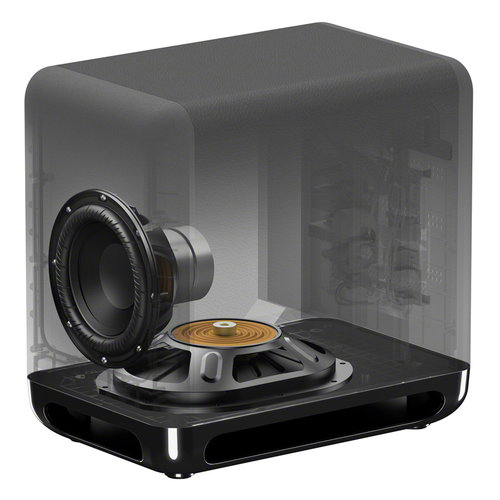 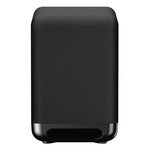 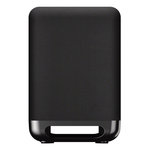 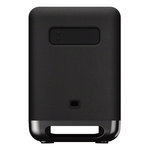 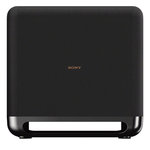 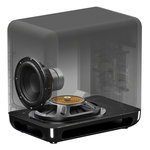 With 300W of deep bass sound from a powerful 180mm driver and passive radiator, this subwoofer boosts the impact of everything you watch and listen to. Enjoy booming explosions and the deepest beats you've ever heard without distortion. You'll also hear clearer voices and extra fidelity for truly authentic soundtracks.

Sony's HT-A9 Home Theater System, HT-A7000 Soundbar, and optional speakers have been designed under a common Omnidirectional Block concept. The design of the SA-SW5 is a perfect match for these systems. Its sophisticated rounded edges represent a single solid block providing wide-spreading sound. The combination of rich material textures emphasizes an affinity with any living room environment.

See the technology inside

Sony has been very kind providing HT-A5000 soundbar for me to test, it's a great product on it's own! But having additional accessories as Sony SA-SW5 subwoofer and Sony SA-RS5 rear Atmos speakers are a game changer!

The quality of bass is superior, there is no distortion, clear, steady, punchy low bass.
Seamless connectivity and stable connection to the soundbar.
Built quality is exceptional.

I highly recommend this product as additional accessory for Sony HT-A7000 and HT-A5000 soundbars.

My personal opinion:
I wouldn't waste extra £300 GBP on top of the range HT-A7000 soundbar, but instead would buy Sony HT-A5000 and add soundbar and Atmos rear speakers!

Sony should include this subwoofer to all new soundbars, as it's incredible product.

However, on 19th Aug, abt 2+ weeks after, sub suddenly had crackling sound when bass kicks in. Seems like something is rattling inside.

Sent to Sony on 24th Aug. Was told abt 2 weeks for repairs.

Ive been using Subwoofers for years. Never had a sub broke down within a month.

The installation, (even for myself with limited technical ability) was easy.

The connection instructions are clear and logically formatted with useful connectivity tips.

The power connection, approximately 1m cable and a link button for connecting to the sound bar, are placed discreetly at the rear; therefore the appearance is not affected.

The clarity of sound is extremely impressive.
When linked with rear speakers and sound bar the subwoofer comes into it's own; the sound becomes all enveloping!

Overall, I am delighted with the all aspects of the product. It has brilliant sound quality with impressive easy to use features.
Highly recommended!
This review was collected as part of a promotion
February 16, 2022
Whoopsadaisy
Originally posted at
Sony
Rated 4 out of 5
Excellent addition to A7000 Soundbar
The Wireless Subwoofer SW5 from Sony is the optional extra speaker is to go with their new flagship Soundbar the A7000. It’s very simple to connect, you turn it on and it’s automatically found by the A7000 Soundbar. It’s a great addition to an already excellent sound bar.
This review was collected as part of a promotion
February 12, 2022
Chas1953
Originally posted at
Sony
Rated 5 out of 5
Great feature!
I bought this with HT-A9, a perfect match, and it works great.
February 11, 2022
Mehrdad62
Originally posted at
Sony
Rated 5 out of 5
Extra oomph in all the right places.
One of the hardest things to do in life, is describe sound, so much so that words such as "wide, stage, depth, resolution" all get used, but quite often are used to describe something completely different.
What's even harder, is to describe subwoofers.
So without any use whatsoever of wide, stage, depth or resolution (well maybe depth) let's try and let you know how good this sub really is... (And it's really good!)
So, with most subwoofers I have always used the old "if it's heavy, it's probably good" and it seems to have done me well so far (with one exception in the 90s when I bought a sub from a market and it sounded horrific) and this sub is no exception, it tops the scales just over 13kg, of which I'd hazard a guess at a 11kg speaker and the other into construction materials, it's a really solid build, and the finish quality is really good.
Connection to the HT-A7000 is as simple as plugging it into the mains and powering on, that's it. The A7000 will detect it and connect to it fully automatically, it's really, really simple.
Ok, that's all well and good, easy connection, good build quality.... But how does it sound....
Now, subwoofers tend to come in 3 distinct categories.
1 ones that sound punchy
2 ones that hit great sounding low frequencies
3 ones that sound like a giant blowing raspberries
Number 3 is not good, probably best left to people's bad car installs whereas numbers 1 & 2 are good, sometimes you get subs that are both 1&2, these can have the potential to be excellent, the SA-SW5 is one of these.
For setting up and checking subwoofers I generally use two listening methods.
Firstly I play the Jurassic park T-Rex escape scene.
In this scene you can check bass levels on many particular events, the foot steps of the approaching T-Rex, the thunder, and the roar.
On the footsteps, bad subs will show a distinct warble effect after each pound as the sound tapers off, this subwoofer did not, it provided a great initial thud, followed by a perfect fall off as the sound tapers, great sounding. The thunder in bad subs will sound good, but you will get "empty" spots where the frequency is just beyond the response frequency of the sub, again this does not happen with this subwoofer, the sharp bang of the thunder coming from the A7000 is perfectly followed by a deep boom from the sub while the distant rolling bass and echoes are perfectly rendered from the subwoofer.
Lastly, the T-Rex roar.
Just because on a fully kitted out 5.1 or 7.1 system it sounds awesome, and yes, it really does on the SA-SW5.

The second way I test subwoofers, is by playing a hi-res version of the popular dance song "Smack my (female dog) up" by the Prodigy.
This song has so many elements that rely on good subwoofer set ups it's really unreal, the initial kick at 42 seconds is followed by so many elements that are deep and bassy that it's a really great way to check the capabilities of a good subwoofer.
Each element, each kick, pad and synth sounds perfect to my ears. Each kick has punch, each synth has great depth, it's an overall exceptional experience.
Which is how I'd sum up the SA-SW5 as a whole, it provides an exceptional experience, which in itself adds to the brilliant audio from the host A7000.
For some the A7000 holds quite enough punch as it is, but for that extra bit of excellence, I would thoroughly recommend this unit.
This review was collected as part of a promotion
February 10, 2022
Lord-Viridis
Originally posted at
Sony
Rated 5 out of 5
If You Like Bass This Speaker Is For You
I use this with my Sony HT-A7000 soundbar and what a brilliant addition to my system this is.
It’s a big speaker but the deep rich bass sounds are second to none, really enhancing the immersive viewing experience whatever you are watching or listening to.
With it being wireless all you need is an electrical socket nearby, I plugged it in and within seconds it was connected to my system ready to use.
You can adjust the bass volume separately on the remote control, I have it at its highest setting as I like to hear the rumble of the bass when watching a movie.