One of the most hallowed nameplates in the history of home audio, KLH is back with a full line of new-design speakers – and a rededication to the company’s original mission to deliver an affordable audiophile experience to all. The Kendall 3-way tower speaker, the flagship of the new line, embodies that goal. The Kendall features custom designed drivers of durable and sonically superior Kevlar and anodized aluminum, with oversized magnets, braided tinsel leads and high-quality crossover circuitry to ensure smooth transitions among the speakers. Solid, rigid MDF internal driver chambers are braced for ultra-low resonance. The whole package is finished in real wood veneers – black oak and American walnut – and brushed-aluminum speaker faceplates that look equally elegant with or without the seamless magnetic grille attached. The new KLH is so confident, the company offers an unheard-of 10 year warranty. But just as in the original KLH, it’s all about the sound, and the Kendall transports you convincingly to concert hall or cinema at a fraction of the cost of most high-end speakers. World Wide Stereo is proud to be an inaugural dealer for the new KLH speaker line.

Each Kendall tower begins with a pair of 6-1/2-inch Kevlar woofers, for strength and stiffness, suspended via flexible, durable butyl rubber in powder-coated, die-cast aluminum baskets with oversized magnets. A 5-1/4 inch midrange driver is similarly rugged. And the 1-inch dome tweeter is formed of anodized aluminum for crystal clarity, linear response and maximum dispersion.

The individual drivers are controlled by custom crossover circuitry, built with the highest-grade components, and tied together with braided tinsel wiring, all for minimal interference among the drivers, and for maximum extension. Together, they reach deep down to 25Hz, and up beyond hearing to 23kHz, with flat frequency response (+/- 3dB) and wide soundstage.

Tuned to the room

The Kendall includes a rear bass port that can be tuned to reduce the airflow and optimize the bass response when the speakers are placed adjacent to the walls.

The nickel-plated binding posts handle your choice of speaker wire connections (banana plugs, spade lugs, posts, bare wire). And if your amp or surround receiver has a couple channels to spare, consider bi-amping the Kendalls (connections supplied to separately power the lows and highs) for ultra-clean sonic reproduction. A sturdy MDF plinth and a variety of mounting feet are included, from rubber (for bare floor) to spikes (carpeting), for optimum decoupling from the room surface.

5 months ago
Great sound with retro look
I have the speakers in the living room for 2 channel music listening. They have an excellent sound stage and can dig deeper than most speakers this size. My wife even commented on how good they sound.
June 20, 2019
christopher t
Purchased
7 months ago
I highly recommend the Kendall loudspeakers
I’d like to start off by stating that I just recently found world wide stereo, and I’m glad that I did! My product specialist was Andrew and his knowledge and expertise was greatly appreciated, as I was thinking of purchasing from the renewed KLH brand, I had heard of them years ago, but was unaware the brand was being relaunched under new leadership, Andrew put to rest any reservations I may of been having about making a possible purchase, as his intellect about audio gear was second to none. I had zeroed in on the KLH audio Kendall model, tower speaker, as it has some pretty remarkable specifications, that seemed rather optimistic due to its size. Andrew assured me they had complete accuracy within their specifications, as he had prior listening experience with the KLH Kendall’s at World Wide Stereo. I was coming from 10 plus years of Klipsch ownership and was looking for a different sound signature, as Klipsch has a sound of its own with their horn loaded tweeter design. Klipsch is a great brand, but I longed to have a different listening experience. I had a few follow up phone calls with Andrew and he had eased my reservations and I decided to make the KLH Kendall purchase.

Timely delivery of my speakers, they arrived un-damaged from any shipping errors that could have occurred, and arrived within a week.
As I began carefully unpacking my speakers I was impressed by the packing that KLH had provided, it was sturdy, solid, and speakers was firmly in place within the carton.
Upon first inspection, I was impressed with the appearance of the cabinetry, real wood veneer finish, I selected Black Oak, the grain looks stunning! I really like the plinth, with the available spike or rubber feet application, to reduce sound reflections and for decoupling purposes. KLH offers, on the Kendall, port tuning, to your preference due to room acoustics or speaker placement, via a foam plug that you may elect to use in place of one of the two rear firing ports. I have chosen not to use the port plug, my
room acoustics don’t warrant the need to do so.

From the minute I hooked up the Kendall’s I immediately noticed a depth to my sound stage, not previously noticed with the Klipsch. The Kendall’s are one foot from rear wall, seven and a half feet spaced from one another, and my listening chair is eleven and a half feet from the Kendall’s. Kendall’s are toed in approximately 20 degrees towards my listening position. My first impression was like I stated, more depth to sound stage, but also of other notable factors as well. The center image was notably wider than with my previous speakers, ie: both on and off axis I noticed immediate wider center image. Further listening also revealed that right out of box, these will need a few hours on them before they really open up, some say speaker break in to be a myth, pseudo science (placebo), but I know what I heard and I conclude it wasn’t in my head, I’d say after about 3 hours of listening to various media, CD, vinyl primarily, various genres, I noticed the Kendall’s to be producing sound a little less effortlessly, not as restrained (muffled), but more transparent and spacious, wide open sound stage was producing nuances in songs that I’d heard several times, now revealing bits of material never once heard before. Kendall’s seem to be quite revealing. The three way design is a feature not found in my previous speaker, so to have that bit of extra depth is nice, rich full sound. Kendall’s produce a nice dynamic sound, from the subtle high hat, chimes, bells and other instruments of various nature, to the low bottom end, scratching the surface of sub 30 Hz cycles, these can really dig, and sing on the high end of the spectrum. Kendall’s have a nice neutral, natural sound signature.

Other key notable feature include: magnetic grilles, bi-wire, bi-amp capable from the dual binding posts, 96 dB efficiency for a wide array of amplification choices, Kevlar drivers with Butyl rubber surrounds, frequency response of 25 Hz-23kHz,
and a TEN YEAR WARRANTY, that’s unheard of in the audio industry!

In closing I’d like to add, I’ve owned the Kendall’s nearly 2 weeks now, I’ve concluded the Kendall’s articulate all of my music spanning over a vast array of genres in a way that surpasses my expectations! You’re not limited by what gear you use either, with their 96 dB efficiently most anyone can appreciate what the Kendall’s have to offer, rather it be from an AVR, 2 channel stereo receiver, or high powered amplifier, you’re sure to find them quite pleasing. I’d also like to thank Patrick from KLH audio, who was also instrumental with this purchase, his knowledge was greatly appreciated and he was supportive by both phone and email, KLH stands behind their products! I highly recommend the Kendall loudspeakers! 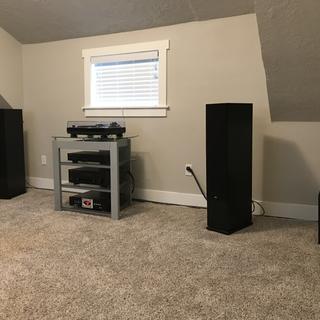 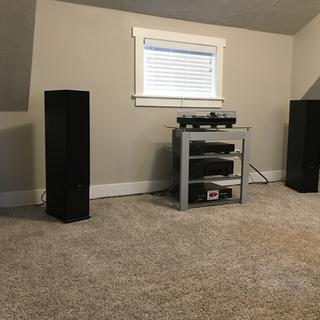 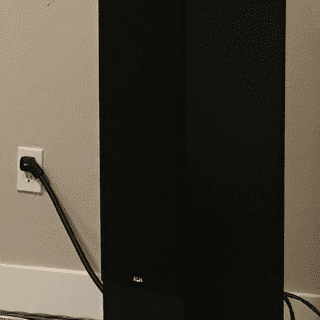 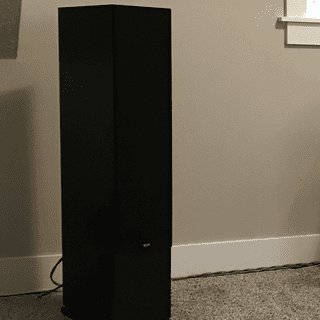 April 14, 2019
Nathan J
Great pair of Speakers from KLH Audio
I have this and have used them for music as well as for movies [with KLH Story as Center, and Windsor as subwoofer]. It truly shines and have more clarity, punch and power handling compared to the Polk signature series set I have. They truly are a great value at this price point. The speaker is packaged really well and came with spikes if you're placing them on a carpeted room. It does came with base if you want to use the spikes on wood or flat floor. also came with foam plug if you want to plug one of the ports [it has 2!]. The built quality, nice touches like the magnetic grill cover, the heaviness of the entire cabinet, the great feel when you touch it, makes the experience better.

Overall I highly recommend this speaker. Try them out at World Wide Stereo and you can hear the difference. It does rival some of the more expensive speakers and this one is not as expensive. 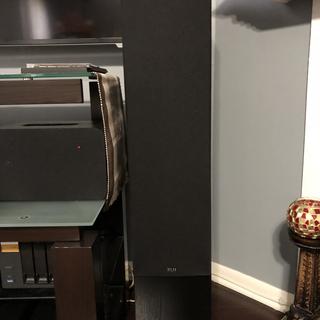 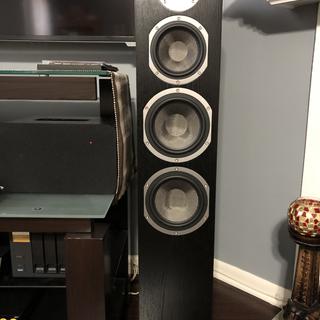 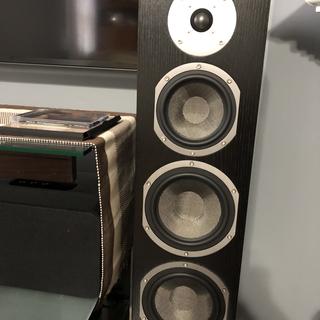 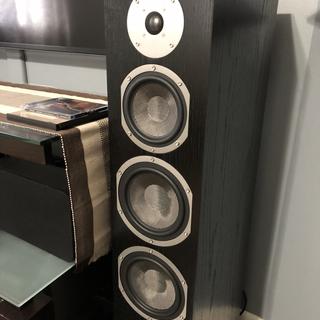 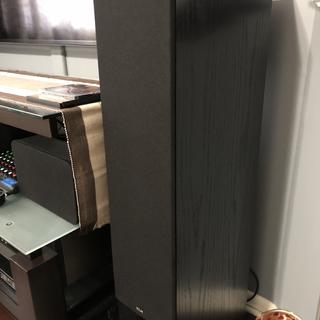